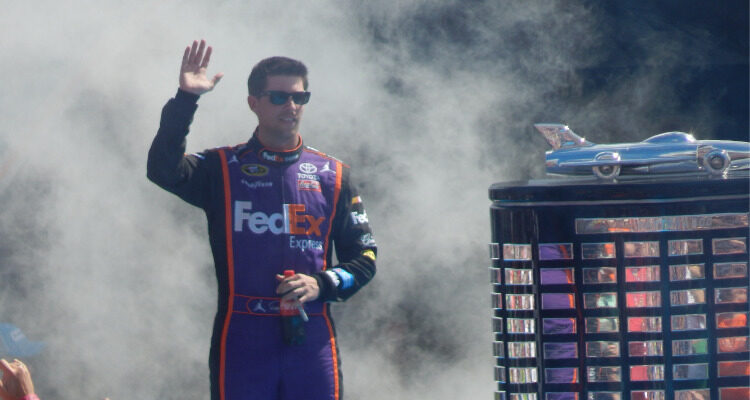 NASCAR officials ordered Denny Hamlin, the driver of the #11 for Joe Gibbs Racing and the co-owner of the 23XI Racing team, after he mocked Kyle Larson for the Hendrick driver causing a wreck at Talladega on the final lap of the race.

On the final lap, Kyle Larson, who was running in second place behind Erik Jones, jumped to the outside lane in order to block a run by Kurt Busch. Larson made contact with Busch that drove his car into the outside wall.

After making contact with the wall, Busch came down the track and collected his teammate Bubba Wallace. Both Busch and Larson race for Hamlin’s 23XI Racing team.

Reacting to the wreck caused by Larson, Hamlin shared a gif from Family Guy that shows an Asian driver causing mayhem including a multiple car pileup.

The clip, seen below, shows an Asian woman deciding to cut across eight lanes of traffic without using a turn signal. Her actions result in multiple cars piling up. One car appears to flip and an oil tanker explodes.

Hamlin shared the clip from Family Guy spliced together with the footage from Talladega showing Larson wrecking Busch.

You can watch the video below, where it labels the Asian woman driver as Kyle Larson.

So since @dennyhamlin was forced to take down this absolutely hilarious video, I’ll post it ☺️ pic.twitter.com/zTJyNJHurh

Hamlin would initially respond to people calling him racist over the tweet writing, “Let me say this. I tweet because A it’s funny as sh*t. B because we are friends.”

However, he would quickly course correct, delete the tweet, and proceed to issue an apology.

Hamlin tweeted, “I took down a post I made earlier today after reading some of the comments. It was a poor choice of memes and I saw how it was offensive. It came across totally wrong. I apologize.”

Hamlin is required to begin the training by the end of this week.

Toyota also issued a statement saying, “We have spoken with Denny Hamlin regarding his tweet from yesterday. Toyota supports NASCAR’s decision to mandate sensitivity training for Denny and we will all move forward together.”

What do you make of NASCAR requiring Denny Hamlin to undergo mandatory sensitivity training for using a Family Guy meme to poke fun at Kyle Larson taking out Kurt Busch and Bubba Wallace?