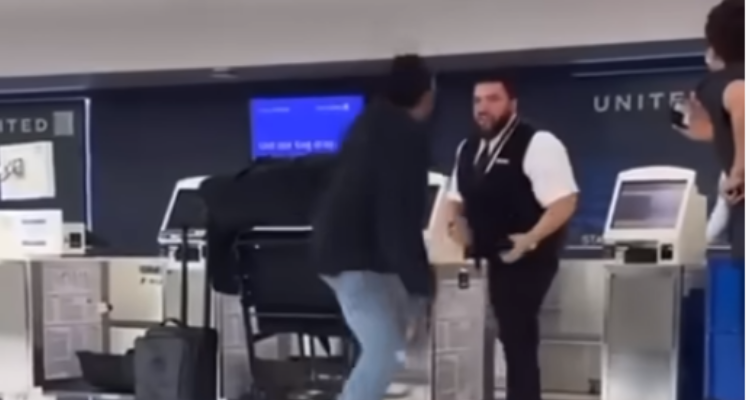 Over the weekend, a video of a man getting into a violent fight with a United Airlines employee went viral on the internet.

Now we have details to give context to a bizarre encounter that is bringing more questions than answers.

The altercation started as a verbal disagreement between Langley and the airline staff. According to The Daily Mail, it is believed that the fight began when Langley used a wheelchair to transport his luggage, instead of a paid-for luggage cart, which cost $5.

After a verbal dispute, the altercation turned physical with the footage that has been released so far showing the United Airlines worker throwing the first punch on Langley.

Langley appears to avoid the first strike and proceeds to slap the airline worker. He then proceeds to throw a flurry of punches that drives the worker back. The worker eventually recovers and slaps Langley across the face.

Langley then tells a witness, “You saw that s**?” before retaliating and flooring the worker with two punches that send the United Airlines worker stumbling backward before eventually tripping and falling over a blue cart and into a luggage belt.

The bloodied United Airlines employee did ultimately get back up under his own power but there is no word on the extent of his injuries.

Langley has since been arrested and charged with simple assault. United Airlines has confirmed that they have fired the airline worker in question but the worker remains unidentified and has not been charged over the incident.

A United Airlines representative informed The New York Post that the company “does not tolerate violence of any kind at our airports or on board our planes and we are working with local authorities to further investigate this matter.”

Langley spent one season with the Denver Broncos after being selected in the third round of the 2017 NFL Draft. In 2020, he played for the Houston Roughnecks as a cornerback in the failed second launch of the XFL that was canceled due to the pandemic. Langley was signed by Calgary Stampeders back in February for a tryout at their training camp.

Langley’s career with Calgary is considered uncertain after the ugly scene at the Newark Airport. The team told CNN, “”The Calgary Stampeders football club is aware of the reports concerning Brendan Langley.”

They added, “The team is currently looking into the matter in order to learn the full details and will have no further comment until the investigation is complete.”

The athlete took to Twitter on May 19th to write, “United yall aint off the hook… worst customer experience in the entirety of my life on Heaven!!!!”

In a follow-up tweet on May 23rd in response to TMZ’s coverage of the incident, Langley wrote, “its crazy how u can get assaulted by an actual airline employee and defend urself, but media will run the narrative that they want to…”

He added, “This is the problem in our society today smh dont believe everything u read! TMZ tbh this is s****y of yall. taking another mans pain as a joke.”