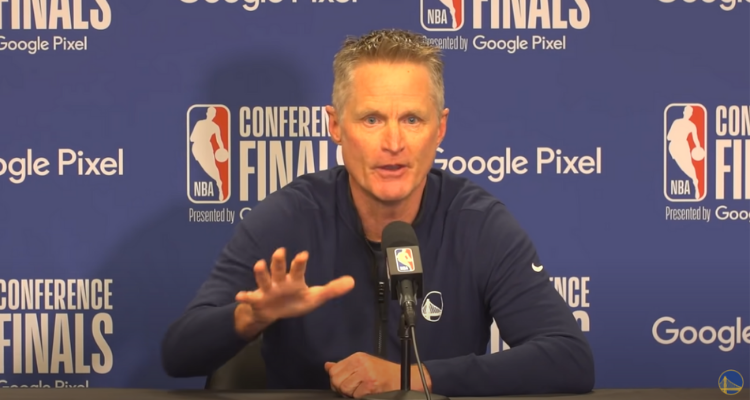 Warriors head coach Steve Kerr went on a political rant in response to the devastating school shooting that killed 19 students and 2 teachers in Uvalde, Texas on Tuesday.

The Golden State Warriors currently lead the Dallas Mavericks 3-1 in the Conference Finals. Coach Kerr addressed the media ahead of Game 5 proclaiming that “I’m not going to talk about basketball.”

“Since we left shot around 14 children were killed 400 miles from here. And a teacher. And in the last 10 days we’ve had elderly black people killed in a supermarket in Buffalo. We’ve had Asian church-goers killed in southern California. And now we have children murdered at school,” he said.

“When are we gonna do something?” Kerr shouted as he slammed the table with his hand. “I’m so tired of getting up here and offering condolences to the devastated families that are out there.”

He went on to call out the Senate for not passing H.R. 8, a universal background check bill that has already passed the House.

His rant blamed Republican lawmakers for not passing the bill despite the fact that background checks have been required to legally purchase a firearm since 1998. According to the FBI webiste: “Since launching in 1998, The National Instant Criminal Background Check System (NICS) has conducted more than 300 million checks, leading to more than 1.5 million denials.”

“Enough!” Kerr yelled in his press conference. “There’s 50 senators right now who refuse to vote on H.R. 8. … there’s a reason they won’t vote on it: to hold onto power.”

It’s not clear how exactly Republican senators are holding on to power by not passing a universal background check law that would nullify existing state laws that allow for sales between private individuals. It is current law that a background check must be completed on the buyer of a firearm when the seller is a licensed dealer.

Kerr ended his rant by appealing to people to consider the families of the victims. Kerr’s own father was gunned down in Beirut in 1982 during the Lebanese Civil War, so this is a touchy subject for the three-time championship winning coach.

Kerr Previously Called For Removal Of Police From Oakland Schools

The coach previously spoke at a rally organized by the Black Organizing Project (BOP) back in June of 2020 calling for the removal of police officers from Oakland, California schools. The school board voted unanimously on June 24, 2021 to pass the “George Floyd Resolution” which eliminated the Oakland School Police Department (OSPD) entirely.

The BOP director of communication, Jasmine Williams, explained in an interview with KQED that the George Floyd Resolution was needed to address “hundreds of years of systemic oppression and very apparent anti-Blackness within school spaces.” BOP advocated for funds to be reappropriated to counselors, librarians and teachers.

Coach Kerr echoed these sentiments in his own statements at the rally saying, “This to me, [is] what it’s about. Because you got to learn, you have to understand what is happening out there.”

“If you care about something you got to add your own work, your own impact, that’s what I’m trying to do.”

Activists at the rally chanted, “Police Free schools!” and carried signs calling for their removal.

Pundit Clay Travis called out the media for not questioning Kerr’s previous support from removing police from school and advocating for them to be defunded.

He wrote on Twitter, “The fact that not one media member last night — & there were dozens — asked Kerr to explain how his new demand for gun laws to protect kids squares with his prior demands to remove police from schools & defund the police is further proof of how worthless most sports media is.”

He didn’t stop at criticizing the sports media. He also described Kerr as a coward.

“Kerr, presently being hailed as a hero by left wing sports media, is actually a coward emblematic of many on social media. He has passionate opinions on whatever people are emotional about, even if it directly contradicts his prior emotional opinions.”

He would later conclude his thread writing, “Regardless, there are many people with many valid opinions on this issue. Steve Kerr is not one of them. He’s a complete hypocrite. Maybe now he’d like to rescind his past support for defunding & removing police from schools. But the fact no media asked him is shameful cowardice.”

What do you make of Kerr’s comments? What about Travis calling him and sports media out?