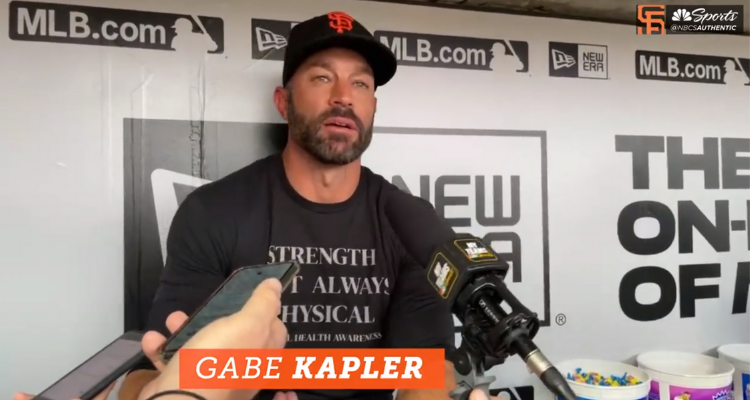 Major League Baseball’s plunge into progressive politics continued this week as the San Francisco Giants manager Gabe Kapler says that he will now protest the National Anthem of the United States of America as he feels the country is going in the wrong direction.

Last Tuesday, a teenaged gunman shot his grandmother in the face and then proceeded to drive to Robb Elementary School in Uvalde, Texas, and commit a mass shooting that left 19 students and 2 teachers dead.

Before anyone could process the horrific actions that took place, many on the progressive left used the mass killing as a platform to renew their push for more gun control and gun bans in the United States.

In the wake of this tragedy, San Francisco Giants manager Gabe Kapler announced he would protest the National Anthem when played at the Giants’ stadium to protest gun violence after the Uvalde school shooting.

Kapler explained his position in the media, “I don’t plan on coming out for the anthem going forward until I feel better about the direction of our country,” Kapler told reporters on Friday.

He added, “That’ll be the step. I don’t expect it to move the needle necessarily, it’s just something that I feel strongly enough about to take that step.”

“I don’t plan on coming out for the anthem going forward until I feel better about the direction of our country” – Gabe Kapler pic.twitter.com/J1MdlVL3XI

Kapler published a blog post on Friday detailing how he wanted to walk back inside during the anthem on Wednesday and felt like a coward for staying. Kapler explained that he does not believe the United States’ elected officials are representative of the American population.

“Every time I place my hand over my heart and remove my hat, I’m participating in a self-congratulatory glorification of the ONLY country where these mass shootings take place. On Wednesday, I walked out onto the field, I listened to the announcement as we honored the victims in Uvalde. I bowed my head. I stood for the national anthem. Metallica riffed on City Connect guitars,” Kapler said.

He later added, “I am not okay with the state of this country. I wish I hadn’t let my discomfort compromise my integrity. I wish that I could have demonstrated what I learned from my dad, that when you’re dissatisfied with your country, you let it be known through protest. The home of the brave should encourage this.”

The Giants manager wasn’t the only member of the MLB family to protest in the wake of the shooting. The New York Yankees and the Tampa Bay Rays on Thursday used their social media platforms to go on a full anti-gun blitz, dropping statistics about gun violence and incorporating woke terminology, such as “Latinx.”

“In lieu of game coverage and in collaboration with the Tampa Bay Rays we will be using our channels to offer facts about the impacts of gun violence,” the Yankees said in a Thursday statement.

“Every day, more than 110 Americans are killed with guns, and more than 200 are shot and injured,” the first fact offered read.

They would later tweet, “Firearms were the leading cause of death for American children and teens in 2020.”

MLB teams are no strangers to engaging in controversial political and social causes. With the month of June around the corner, MLB teams will be promoting LGBTQ Pride Month through all 30 of their teams. Every team is required to have an LGBTQ pride night as a promotion at their stadium.

When the Detroit Tigers hold their PRIDE night, ticket sales will be donated to an LGBT organization of choice, some options promote puberty blockers, medical transitions, drag queen events for kids, and LGBT sex-ed for kids.

Last year, MLB moved the All-Star game out of the city of Atlanta to protest the GOP backing an election integrity bill. The organization claims that the bill would prevent minorities from voting which was a lie backed by Democrats. In 2022, a record number of voters are expected to vote in the 2022 Gubernatorial election in the state of Georgia.

MLB has yet to apologize to the city of Atlanta or the state of Georgia for helping Democrats attack the region.

What do you make of Kapler’s National Anthem stance?