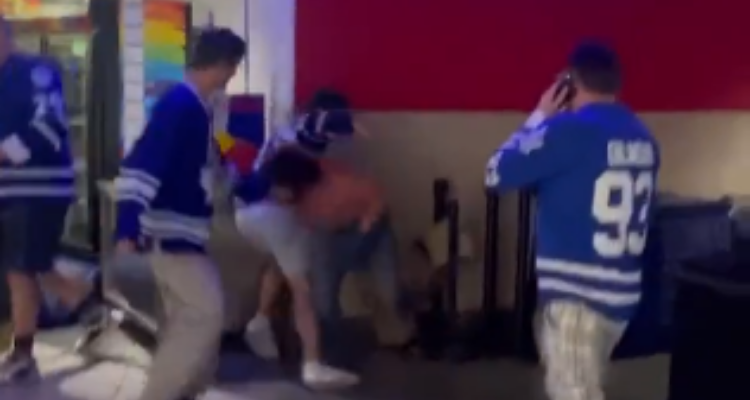 A number of fans of the Toronto Maple Leafs decided to fight each other inside Scotiabank Arena following the team’s loss to the Tampa Bay Lightning in the first round of the Stanley Cup finals.

The Maple Leafs would lose to the Lightning 2-1 on Saturday with Lightning forward Nick Paul scoring twice with the game winner coming in the second period.

Tampa Bay struck first scoring with Paul scoring off a rebound on an odd-man break. The Lightning would seemingly tie it up with John Tavares skating into the slot area and notching a wrister past Lightning goalie Andrei Vasilevskiy. However, the goal would be washed out as a penalty for interference would be called against the Leafs.

Toronto would eventually tie the game with Leafs forward Morgan Rielly ripping a wrister past Vasilevskiy from the right dot.

Paul would break the tie with a little over 3 minutes left in the second period. He would pick up the pick from the sideboards and knife his way to the crease and eventually slam it past Leafs goaltender Jack Campbell.

Following the defeat, Leafs fans inside Scotiabank Arena began fighting each other. It’s unclear what started the fight, but you can see one fan wearing a Mitch Marner jersey throw a number of haymakers and pursue a another shirtless fan around the concourse.

While that’s happening another fight breaks out when people try and put a stop to the original fight. Two fans are shown wrestling each other to the ground where one began throwing jabs at another before what appears to be a police officer breaks them up.

Leafs fans are turning on each other… pic.twitter.com/rm7RFcNqhE

While those fans were seemingly taking out their anger at losing out on each other, a number of other fans were a lot more calm albeit disappointed and frustrated with another loss in an elimination game.

One fan said, “We just go through this every year and it’s the same disappointment. You get excited for the playoffs every year and just kind of the same ending. I don’t know if there’s changes that need to be made or what, but, you know, this is a great series and this should have been a conference final not a first round series. Sucks obviously.”

“I was expecting it, but I’m still pissed,” said another fan. “I’m getting sick of it. I wanted to throw my drink on to the ice, but I held back.”

The Maple Leafs have not won a playoff series since 2004 when they defeated the Ottawa Senators in seven games. However, they wouldn’t make it past the next round as they would fall to the Philadelphia Flyers in six games.

Following the 2004 season, the Leafs didn’t even make the playoffs again until the 2012-13 season. The Leafs finished second in the Atlantic division and third overall in the Eastern Conference with a record of 54-21-7. The team’s superstar center Auston Matthews lead the league in goals with 60. The Lightning would limit him to 4 goals in the playoffs.

The Leafs clearly have a strong team, but one has to wonder if they have the right components for a deep playoff run. Recent evidence seems to show they don’t.

What do you make of these Leafs fans fighting following their elimination from the Stanley Cup playoffs?