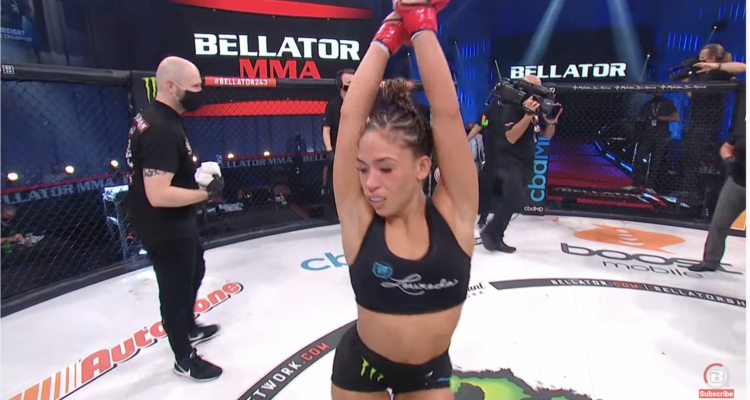 Fan-favorite Bellator fighter Valerie Loureda has announced that she’s saying farewell to MMA and will be starting a new chapter as the first Cuban-American woman to sign with the WWE.

During on an appearance on The MMA Hour, Loureda broke the news that she’d be exiting the MMA world for good and had just signed with WWE to become one of the next professional wrestling superstars.

“I have now become the first Cuban-American woman and I am now a WWE Superstar,” said a joyous and teary eyed Loureda to host Ariel Helwani. “I’m really excited, and I’ve dedicated my whole life to martial arts, and everything has come to this moment. And this is my opportunity to showcase my culture and entertain the world.”

The taekwondo pro turned MMA fighter, and now pro wrestler, said that it was always a personal and professional goal of her’s to eventually headline Wrestlemania. She’s set to start with the WWE on July 18, a day before she turns 24-years-old. “Turning 24 and becoming a WWE Superstar, like, that’s my dream,” Loureda continued, “I’m going to train there very hard. My goal personally is to be on live TV by the end of the year.”

“I’m emotional because I’ve worked really hard in my whole life. I’ve had a very hard upbringing, and every day, I’ve always just believed in myself, and trained hard hoping to make it to the next step and just chasing a dream that I’ve had in my heart since I was a baby.”

Loureda’s signing marks another big accomplishment for the WWE, who has prioritized bringing popular and elite athletes into its developmental pipeline.

In an interview with the New York Post, Loureda confirmed that conversations with the WWE began when her manager was “negotiating an NIL deal between WWE and NCAA champion wrestler A.J. Ferrari, and her [Loureda’s] name came up.”

taking off 👀✈️ my life will never be the same pic.twitter.com/dGUzEaemc6

Loureda was invited to watch WrestleMania in April and was given the VIP treatment in order to entice her further to consider the deal. After attending and enjoying the experience, she was sold.

Luckily, there is no bad blood between the newest WWE star and Bellator, where she began her MMA career which launched her to stardom.

Shortly after announcing her signing with the WWE, Scott Coker, President of Bellator, provided a statement to MMA Fighting.  “Valerie Loureda is a very young and talented athlete who can accomplish plenty in MMA for years to come,” Coker said, “but for now we wish her the best of luck as she pursues her team of becoming a WWE Superstar.”

“She will remain an active and under contract fighter with Bellator, and we look forward to welcoming her back into the cage in the near future,” Coker continued. “We take great pride in allowing our athletes to test themselves in additional arenas such as boxing and pro-wrestling.”

Are you excited to see what Loureda brings to the WWE?