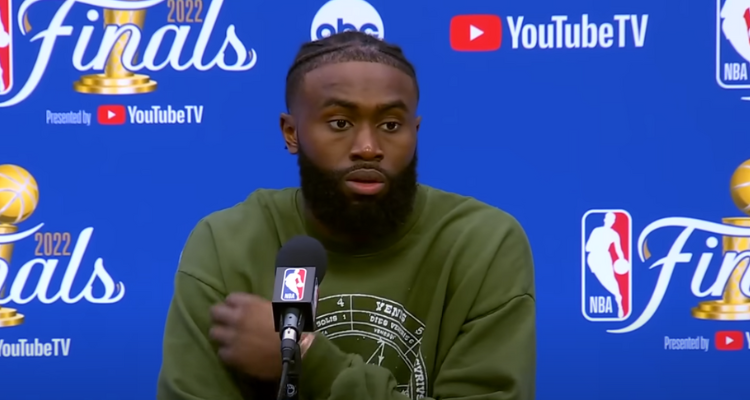 Ever since the progressive left shattered the lines that separated sports from politics, the NBA has emerged as arguably the most progressive sports league out of the major four leagues in the United States.

From the players to the coaches, to the fanbase itself, there isn’t a league more left wing than the National Basketball Association and now that could potentially lead to a boycott during the most important stretch of their season, the NBA finals.

The Boston Celtics are currently playing the Golden State (San Francisco) Warriors to determine who will be the NBA Champion for the 2021-22 season. The Celtics currently lead the series 2-1.

He believes that players sitting out might be on the table as a form of protesting gun laws and the 2nd amendment.

“Sometimes people argue ‘stopping a basketball game, what affect is that going to have?’ I would say it raises awareness and that’s important.”

Jaylen Brown says rising gun violence in the country ‘could’ lead to players deciding to sit out an #NBAFinals game in protest. pic.twitter.com/WrypQgTaQc

“It could. I mean, you keep an open mind. You never know. Definitely, things need to be addressed,” Brown said when asked if a boycott of the Finals was possible.

“Sometimes people argue and say that stopping a basketball game or something, what effect is that going to have on society? I would say in response that it raises awareness and that’s important. It gets people’s attention,” he said.

Brown further added, “It’s a topic that’s being talked about now. And certain people have pressure on them, and changes need to start to get made. So I definitely think it’s an effective strategy that could work.”

Both the Celtics and the Warriors have already made political statements to support Democrat backed gun control and gun ban measures. During Game 2 of the NBA Finals, both teams wore orange shirts that read “End Gun Violence” calling for gun reform after the Uvalde, Texas shooting on May 24.

Warriors coach Steve Kerr, who is one of the most outspoken head coaches in sports when it comes to supporting progressive issues, says that action must be taken now in terms of gun control.

A furious, emotional and fed up Steve Kerr pleaded with senators to do something about the mass shootings. pic.twitter.com/fmERY4izFl

“I ask you, Mitch McConnell, I ask all of you Senators who refuse to do anything about the violence, and school shootings, and supermarket shootings. I ask you: Are you going to put your own desire for power ahead of the lives of our children, and our elderly, and our churchgoers? Because that’s what it looks like. That’s what we do every week. I’m fed up, I’ve had enough…” Kerr said.

He later added, “Fifty Senators in Washington are going to hold us hostage. Do you realize that 90 percent of Americans, regardless of political party, want universal background checks? 90% of us. We are being held hostage by 50 senators in Washington who refuse to even put it to a vote, despite what we, the American people, want. They won’t vote on it, because they want to hold onto their own power. It’s pathetic. I’ve had enough.”

The Boston/Golden State NBA finals are already the least viewed Finals since 2007 after two games played. Sports Media Watch reported that Game 2 averaged a 6.2 rating and 11.91 million viewers on ABC. Game 1 saw the ratings come in at 6.4 and viewership at 11.90 million.

The league has already been carpet-bombed with political protests from Black Lives Matter, Chinese Communist Party resistance, and the election of Donald Trump.

If the players decide that playing the games they are paid eight figures a year to participate in are no longer worth it, then the fans of their teams will also turn their backs on the league as the message will be clear as day that they no longer matter in the eyes of progressives.

Game 4 of the NBA Finals is scheduled to take place on Friday, June 10 at 6 p.m. PT. It will be broadcast on ABC.

What do you make of the possibility of the NBA Finals being cancelled because the players won’t play in protest of gun violence?

NEXT: Charles Barkley Says San Francisco Needs To Clean Up “All The Dirtiness And Homelessness”