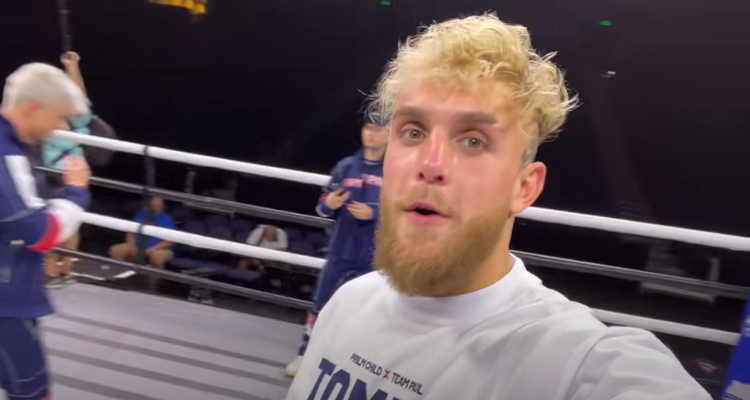 Celebrity boxer and YouTuber Jake Paul (5-0) took to Twitter, where he described people who voted for President Joe Biden and don’t regret it as “the American problem.”

He then wrote, “If you’re reading this and voted for Biden and you still don’t regret it then you are the American problem.”

He followed that up recently saying, “My generation, left or right, agree with me. We need the President of our country to do betr.”

He then shared a screenshot of the Morning Consult’s headline that claims “only 28% of the youngest Democrats strongly approve of Biden’s job performance, down 31 points since he took office.”

The headline is based off of the Morning Consult Political Intelligence tracking.

Paul is known for talking trash on Twitter especially when it comes to promoting his fights. Back in January 2021, he shared a video of plane pulling a sign that reads Conor McGregor is scared of Jake Paul.”

Damn Conor… the whole world is starting to realize it… @TheNotoriousMMA pic.twitter.com/dx6bJu7Qqk

He would write in July 2021, “You can tell Conor has lost ‘it.’ He no longer speaks from a place of authenticity & you can tell he’s trying to convince himself of his own lies.”

“He takes offense to everything now. He’s bathing in his own insecurity’s. When we fight I will further expose him for the fraud he is.”

McGregor’s no stranger and threw it back at him describing both him and his brother Logan as “dingbats.”

He told YouTube Boxing, “I couldn’t care about them two dingbats. I don’t see so, but never say never. If they’re gonna keep competing and whatnot, who f—ing knows? But dingbats, the two of ‘em.”

While Paul is known for his trash talking, all five of his points about Joe Biden are correct.

The inflation rate in the United States hits 8.6% in May according to the U.S. Department of Labor. That’s the highest it’s been since December 1981.

CNet reported at the end of March that “rents have gone up 17% nationwide year over year, with February marking the seventh consecutive month of double-digit price growth for studio to two-bedroom apartments.”

And as for Biden’s “incomprehensible language,” one only needs to listen to any interview or talk he gives to see the truth in that.

What do you make of Jake Paul’s comments about Joe Biden voters and Joe Biden’s record?