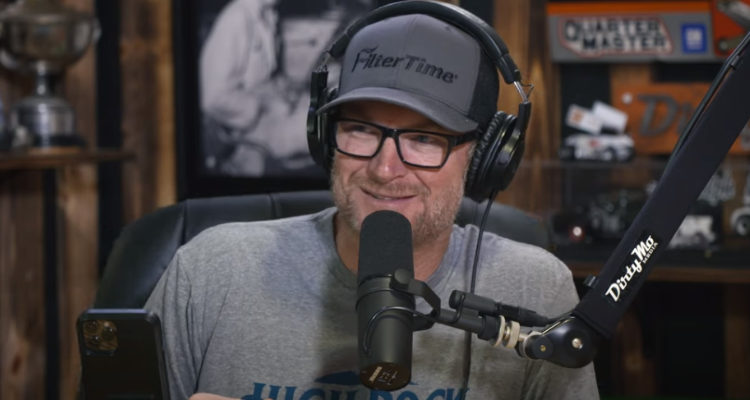 If you didn’t watch the race, Chastain drove into the rear of Denny Hamlin sending the #11 car into the wall and crippling his car for the rest of the day.

While Hamlin’s car was crippled, he was still able to keep it on the track and took it upon himself to harass Chastain the rest of the race by blocking and slowing him down.

Not only would Chastain deal with Denny Hamlin, but he would also have to deal with Chase Elliott after he spun him around following a restart on lap 101.

Following the race, Chastain put the blame on himself saying, “It was terrible driving, Jamie. It’s one thing to do it once, but I just kept driving into guys and at this level I’m supposed to be better than that.”

“And it’s just shame for Moose and Advent Health and Jockey and Worldwide Express. To have all these people believing in me and Justin Marks and Pitbull to put me in this car, they deserve better,” he continued.

He then stated, “I owe half the field an apology and it’s words aren’t going to fix it so I’ll have to pay for it on the track and almost did today, and I deserve everything that they do.”

“I just can’t believe that I continued to make the same mistakes and overdrive the corners and drive into guys. I had time under caution to get reset and we go green and I drive into somebody. It’s terrible, “he concluded.

Dale Earnhardt Jr. didn’t buy Chastain’s post-race interview and compared him to a kid getting caught red-handed in a candy store, but still trying to get away with the candy.

“So, Ross is annoyed by what Denny’s doing, right? As he should be. Denny’s trying to annoy him. So it’s working,” Earnhardt Jr. says. “But then Ross gets out after the race and says, ‘Oh I should have learned. I’m terrible. I’m just a terrible driver today.'”

After Mike Davis, Jr.’s co-host, describes Chastain’s comments as “over-the-top” and “weird,” Jr. makes his candy shop analogy, “It’s like boy walks into the 7-11 and shoplifts, and walks out, and you catch him red-handed, and he goes, ‘Ah yeah, shouldn’t have done that. Ah darn, I know I messed up. Yep, you got me.'”

“While all the while, he’s trying to walk off with that piece of candy he picked up,” he posits. “He’s like, ‘Man, if I profusely apologize maybe I get to keep this candy.’ That’s Ross.”

Jr. then declared, “His words after the race were bulls**t.”

When Davis pushes back, Jr. further explains, “He did [take responsibility], but then poured it on so thick, it was like I don’t know, man. I don’t know.”

“At one point, I almost thought he might be mocking us or something. I don’t know. He’s trolling us. … It got so thick there with — he was going on and on just repeating himself at times,” Jr. continued.

“Nothing over the radio was egregious or crazy,” Jr. asserts. “It’s just you could tell in the moment he’s not super apologetic about it or you know, ‘Oh s**t, man. I messed up, guys. Guys, tell him I messed up, man.'”

“This happens on the track. He continues around the racetrack running. I don’t know what he said on the radio. I don’t know everything. But when Denny’s annoying him later he’s like, ‘Look at this guy, I hope NASCAR is proud of their superstars. What’s this guy doing?’ And then get out and goes, ‘Man, I’m so terrible. I’m so sorry. I should have…’ It was like Jekyll and Hyde,” he proclaimed.

After analyzing Chastain’s post-race interview, Jr. did assert that he doesn’t want Chastain to change the way he drives and even noted that he believes Chastain’s aggressive driving was one of the main interesting focal points of the race.

He stated, “I don’t want Ross to figure it out and get straightened up or whatever the hell is going to happen. I want him to not change a thing.”

“I just want him in some controversy,” Jr. later stated. “If he’s not doing that in that race, I don’t know that we love that race that much. Because I’m telling you, when that happened on the racetrack, I think everybody’s brain flipped to, ‘Oooh this is interesting.’ And then were were kind of captivated by all the shenanigans the rest of the day. And a lot of them were due to things that were involving Chastain. I don’t really want him to dial it back,” Jr. concluded.

What do you make of Dale Earnhardt Jr.’s analysis of Ross Chastain’s on-track and off-track antics at World Wide Technology Raceway?

NEXT: Chase Elliott’s Spotter Says Ross Chastain “Needs An A** Whooping” After He Spun Out Elliott At World Wide Technology Raceway