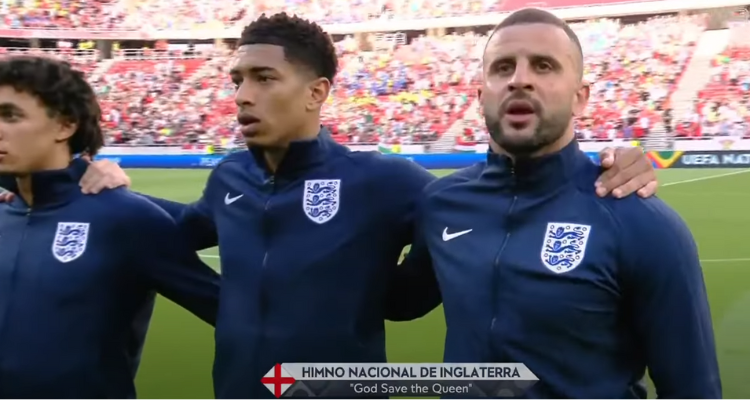 England’s decision to kneel before every game to show support for Black Lives Matter is becoming increasingly unpopular outside of their home country.

On Saturday, England players were booed by Hungary supporters when taking the knee in protest against racial injustice and in support of the Black Lives Matter (BLM) movement ahead of their Nations League clash in Budapest.

The two countries already had a heated history after being disciplined by both FIFA and UEFA for repeated racist fan behavior, during England’s previous visit to Budapest last September.

FIFA announced on September 21st, “After analysing and taking into consideration all the circumstances of the case, specifically the seriousness of the incidents (racist words and actions, throwing of objects, lighting of fireworks, blocked stairways), the Committee decided that the MLSZ would play its next two home matches in FIFA competitions without spectators, the second match being suspended for a probationary period of two years.”

They also fined Hungary CHF 200,000. and stated, “FIFA’s position remains firm and resolute in rejecting any form of racism and violence as well as any other form of discrimination or abuse. FIFA takes a clear zero tolerance stance against such abhorrent behaviour in football.”

Over 30,000 people were able to attend Saturday’s match and they let their boos rain down. After the national anthems played, the England players took a knee prior to kick-off, with boos audible from the stands.

Hungary forced to play game behind closed doors due to fan racism, let in 30,000+ under 14s, who boo England players taking the knee pic.twitter.com/jt652RE310

In England, before the start of every English Premier League game, both teams kneel before kickoff in order to show solidarity with the BLM movement.

All English Premier League teams began kneeling in 2020 during the COVID pandemic after the death of George Floyd. When the kneeling first started, fans were not allowed in attendance due to the UK’s strict lockdown protocols. As fans were let back into the stands a year later, English teams decided to continue to kneel before every game and the gesture has now become standard.

Supporting Black Lives Matter is not a popular stance in most European countries. Many cite the organization’s ties to Communist, Marxist, and anti-Semitic groups for their refusal to back the organization or the movement.

Last year, the country of Hungary was punished by FIFA for displaying anti-LGBTQ signs in the stands as a protest against Germany’s promotion of PRIDE-related organizations during the tournament.

Munich’s mayor had wanted the Allianz stadium to be lit in rainbow colors for the match to protest a new law in Hungary banning school materials deemed to “promote” homosexuality and gender change and restricting the media from showing such content in programs accessible to minors.

England coach Gareth Southgate criticized the Hungary supporters in their country and said that more work has to be done to “educate” the children of the country about the BLM movement.

“The atmosphere when we arrived at the stadium, there were kids lining the streets, it was really friendly. They were waving when we were walking out to warm up. I thought there was sort of pantomime boos when our team came out to warm up,” Southgate said.

“That was different with the taking of the knee but that felt like inherited thinking to me. We do it [taking the knee] to try to educate and I think young people can only be influenced by older people,” he posited.

England coaches and supporters have often dismissed criticism of their kneeling as “uneducated” people who who don’t understand the demands of the BLM movement.

Hungarian government minister Zoltán Kovács slammed Southgate in a rebuttal to his comments saying that “Anyone who thinks that children attending a football match in Budapest can be blamed for any kind of political statement is truly an idiot.”

Hungary would go on to win the game 1-0 over England. It was the first time in 60 years Hungary beat England.

What do you make of the boos raining down on England for their kneeling in support of Black Lives Matter?

NEXT: NASCAR Self-Castrates Itself With Woke LGBTQ+ Statement