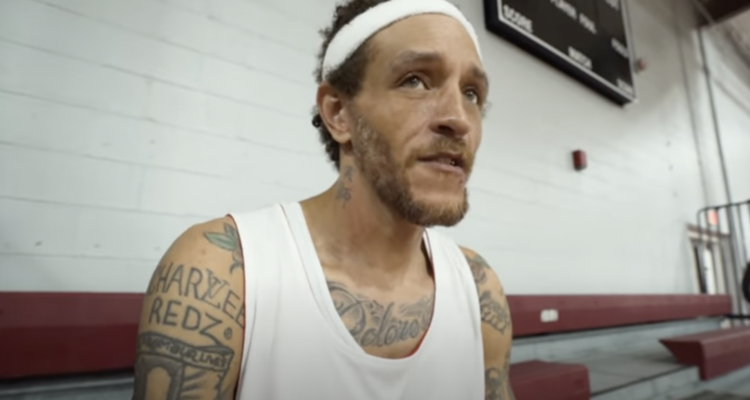 Delonte West trying out for the Big3 in March, 2022 via BIG3 YouTube

Former NBA player Delonte West, who left the courts professionally in 2012, was recently spotted in Alexandria, Virginia, panhandling near a gas station. Despite how things may appear though, West claims everything is alright, telling The Image Direct, “it is what it is.”

Delonte West says he’s ok and is between jobs after a video of him panhandling in Virginia last week went viral pic.twitter.com/J45OnDREKz

TMZ reported earlier in the year that West was planning a comeback to the basketball court, but this development shows that the road ahead for him may not be so easy. According to West, that due to the youth and fitness of his competition in Ice Cube’s BIG3 league, he was unable to make the cut.

During the league’s May draft, West was a “no-show” and appeared as if his comeback opportunity was over.

West, who has publicly admitted to suffering from mental health challenges such as bipolar disorder, as well as substance abuse, explained that the reason for his panhandling is to support his family. “I got children. I’m in between jobs,” West said.

“People can help me as much as they can,” the father of two and former 8 season NBA player pleaded, “but you know, as a man I gotta do what I gotta do for my babies.”

West said that he was thankful for the opportunity to try out and was “excited to have the opportunity.” This current situation he finds himself in isn’t dissuading him from his ambition of returning to the courts in some fashion however.”I’m always involved in the game I love,” said West, who is hoping to earn employment as part of the coaching staff for the NBA. “Last year, I was scouting for the Dallas Mavericks and the previous three years, I was an NBA scout for the Boston Celtics.”

“Prayerfully, luckily, I’ll be up for discussion this upcoming season,” said West.

West had entered rehab back in 2020, paid for and supported by Dallas Mavericks owner Mark Cuban, whose team West had played for from 2011 to 2012. In October of 2021, he was arrested and was charged with “resisting an officer without violence, disorderly intoxication and having an open container” records from the arrest state.

What do you think of West’s current situation?