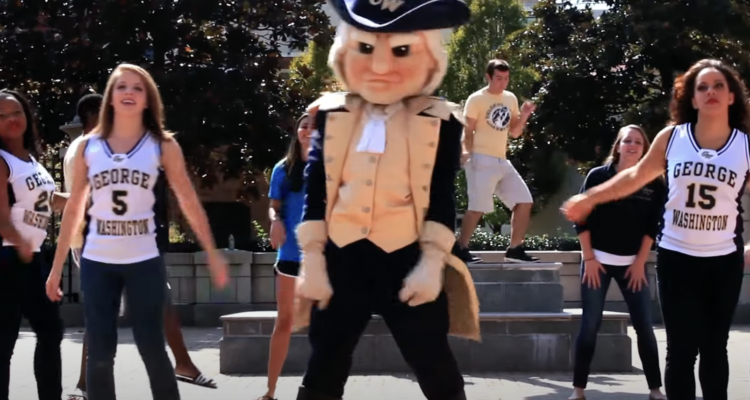 George Washington University Retires ‘Colonials’ For Not Being ‘Inclusive’ Enough

The Colonials moniker will be no more at George Washington University within the next academic year after an effort by members the student body convinced the GW Board of Trustees to replace the name permanently.

Accused of not being “inclusive” enough, the effort to remove the Colonials name from the university started during a Board of Trustees Naming Task Force in a 2020 review that found the moniker “stood apart as an issue of great concern.”

According to a statement released by GW, “After a thoughtful and deliberate process that engaged the university community for feedback, the George Washington University’s Board of Trustees has accepted the recommendation of a Special Committee to discontinue the use of the Colonials moniker.”

The statement claims that the decision was “not taken lightly,” and that the Board and Special Committee assigned to this matter “determined a new moniker will help unify the university community and serve as a source of pride.”

The effort to permanently remove the Colonials began back in 2018. Hayley Margolis, a member of the GW student government at the time, was one of the students who led the effort to change the name. Margolis and others accused the name of not being “inclusive” enough for the student body.

“We’re a very diverse institution,” Margolis told the student newspaper the GW Hatchet. “There are students that, if we were back in Colonial times, wouldn’t have been represented or treated equally. School spirit is something that should be based on equality.”

Politico editor Steve Shepard on Twitter pointed out the irony of the change as a way not to offend those offended by colonialism, pointing out that the American colonists were in fact the ones that fought off a foreign power.

“‘Colonials’ was never a great nickname,” Shepard said. “But it seems to me that it does *the opposite* of glorifying colonialism.”

Potential replacement mascots in the running include a “hippo” and a “riverhorse.”

Changes at the university aren’t simply stopping at the moniker however. There are talks that GW is considering changing the name of its student union, which is currently named after former university president Cloyd Heck Marvin. Marvin’s support of segregation during his life was a point of controversy among the students and staff going as far back as 1971, when the student union was first dedicated to him.

Do you support GW’s decision to remove and replace the Colonials moniker?