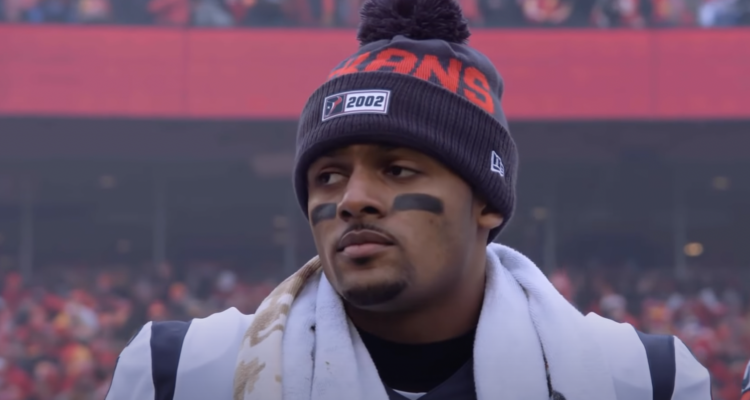 Harris County District Attorney Kim Ogg confirmed she wasn’t aware of the NFL or any NFL team reaching out to her office regarding their sexual misconduct investigation of Cleveland Browns quarterback DeShaun Watson.

Ogg’s remarks came during her appearance on the Mike Meltser Sports and Law podcast, where she answered questions about the District Attorney’s office involvement in the investigation.

She spoke about the evidence against Watson, which was presented by her office to the Harris County grand jury, noting they reviewed over 100,000 pages of documents related to communications on Instagram, and payment methods.

Her office presented 10 complaints to the grand jury in total, stemming from massage therapy sessions with Watson. The Harris County grand jury, and a second grand jury in Brazoria County both refused to indict Watson on criminal sexual misconduct and abuse charges.

Ogg answered questions from Meltser about how the case was handled, including 12 phone calls and two dozen text messages between her office and Watson’s attorney’s during the investigation.

“Totally normal,” Ogg said. “We contact defense lawyers, they contact us. A communication is far different than collaborating or working together to achieve an outcome. That just didn’t happen. It’s not ethical and it’s not what we do and it’s not what happened in this case.”

Here's Deshaun Watson being asked if the NY Times report of at least 66 different massage therapists in a 17-month period is accurate.

To date, 24 plaintiffs represented by attorney Tony Buzbee have brought civil lawsuits against Watson.  Buzbee announced the Houston Texas—the NFL team Watson played for at the time—are being added to the lawsuit on the basis that they facilitated his conduct.

Ogg told Meltser she believes the ultimate sign of justice will be determined by the outcome of the civil trial, and through the NFL’s administrative process.

The civil trials against Watson are currently ongoing, and allegations range from intentional exposure of his genitals, the inappropriate touching of a woman, as well as other attempts of coercive sexual acts.

Although Watson remains under investigation by the NFL, the league was quick to report on both grand juries declining to criminally indict him, and thus far haven’t been interested in speaking with Ogg’s office.

The Texans traded Watson to the Browns in March, and his latest contract is a five-year deal, with $230 million in guaranteed money. It is the most guaranteed money in a contract in league history. A report from Cleveland.com indicated the Browns will not void his contract amid the accusations.

Do you believe the NFL is taking the allegations seriously?

Brad Shepard is the host and producer of Brad Shepard UNLEASHED. He’s a diehard Boston sports fan, and is known for his hot takes.  You can follow Brad on Twitter and Instagram at @ItsBradShepard.