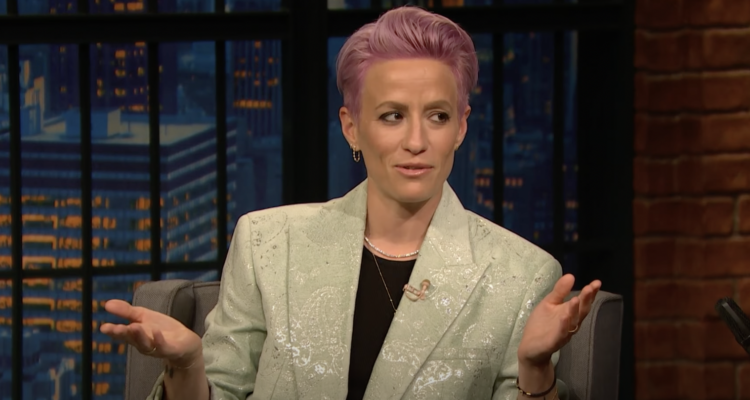 FINA, the governing body for the world of swimming, voted to simply restrict “female swimmers who transition after turning 12 or have started puberty from competing against biological women” according to TMZ.

“Get a grip on reality and step back” Rapinoe said during an interview with Time magazine regarding the decision. She told the magazine “I’m 100% supportive of trans inclusion. People do not know very much about it. We’re missing almost everything. Frankly, I think that what a lot of people know is versions of the right’s talking points because they’re very loud. They’re very consistent, and they’re relentless”

The Olympic gold medalist further dismissed criticisms of the biological differences between men and women and how those differences impact physical competition. “I would also encourage everyone out there who is afraid someone’s going to have an unfair advantage over their kid to really take a step back and think what are we actually talking about here,” said Rapinoe. “We’re talking about people’s lives. I’m sorry your kid’s high school volleyball team just isn’t that important.”

“Show me the evidence that trans women are taking everyone’s scholarships, are dominating in every sport, are winning every title,” Rapinoe said. “I’m sorry, it’s just not happening. So we need to start from inclusion, period. We can’t start at the opposite. That is cruel. And frankly, it’s just disgusting.”

Critics of trans athletes competing in women’s sports quickly went online to argue with Rapinoe’s stance that there was no reason for concern.

“Megan Rapinoe can safely say these things because she is near retirement and she isn’t in danger of being replaced by a transgender athlete,” said public relations expert and conservative critic Vanessa Santos. “She’s doing nothing to preserve the future of female sports. Megan Rapinoe is selfish.”

“The entire soccer team Megan Rapinoe is on needs to replace all current team members with trans women because women’s soccer isn’t that important and she can suck it up to make room for more marginalized people,” said popular YouTuber MechaRandom42 in a post to Twitter.

Recent situations that have spurred the transgender athlete debate include the victory of Lia Thomas this past March. Thomas is a biological male who defeated biological female athletes at the 2022 NCAA Division 1 Women’s Swimming and Diving Championships in the 500 meter freestyle.

Major concerns regarding the inclusion of transgender athletes are not new. In 2014, MMA fighter Fallon Fox, who was born a male, cracked the skull of her female opponent in the second minute of her match before the referee quickly halted the fight.

What are your thoughts on FINA’s decision regarding transgender swimmers?