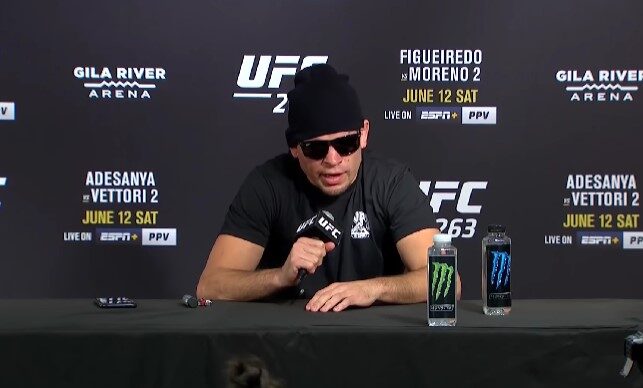 UFC fan favorite Nate Diaz has made his position very clear, either give him a fight soon or release him from his UFC contract so he can pursue other opportunities, such as a teased fight with Jake Paul.

The future Hall of Famer is not happy with the UFC and President Dana White because it has been 12 months since Diaz last stepped into the octagon. Back at UFC 263, Diaz lost a 5-round unanimous decision (49–46, 49–46, 49–46) to Welterweight Championship contender Leon Edwards in a marquee fight in Glendale, Arizona.

Since then, however, Diaz has yet to return to the cage and is getting frustrated with the inactivity. Over the last couple of months, Diaz has been campaigning for a bout with Lightweight contender Dustin Poirier, but White didn’t seem to give that fight much thought. Despite both fighters wanting the fight to happen, a bout agreement was never signed, so Diaz is now looking for fights elsewhere, namely a boxing match with celebrity boxer Jake Paul.

Diaz took to Twitter in his latest spat with White and demanded to be either given a fight by August or released from his UFC contract. Diaz attached a video of Jake Paul knocking out former UFC welterweight champion Tyron Woodley with the following caption, “Ufc release now please or give me fight with anyone in July or August, I have bigger shit to do.”

Ufc release now please or give me fight with anyone in July or august
I have bigger shit to do pic.twitter.com/xyYSCBysLs

Diaz is on the final fight of his current deal with the UFC, but the two can’t agree on an opponent. It was rumored last month that White was planning to have Diaz fight Welterweight rising star Khamzat Chimaev, but Diaz turned down the fight.

White finally discussed Diaz’s latest comments in an interview with The Mac Life. Dana essentially told the outlet that if Nate wants to Jake Paul, he should take the fight.

“You don’t have to be a rocket scientist to look at it and see lots of game-playing and whatever. Contractually, we got to get him a fight, we’ll get him a fight.” White said.  “I like Nate. Let’s be honest, Nate has won one fight in the last five or six years.”

“When these guys get into these positions, you’ve got guys that have been with us for a long time, that we respect, that care about,” he continued. “You’ve got the Donald Cerrones and Anthony Pettis before he left and you’ve got Nate Diaz and Nick Diaz is still under contract.”

White then firmly stated that Nate is no longer the caliber of fighter that would warrant a fight against the top of the Welterweight division.

“You want to be fair and do the right thing, whatever. Nate Diaz isn’t going to come in and fight Kamaru Usman. We’re trying to do the best we can, trying not to s*** on anybody and disrespect anybody, but it’s not like we’re talking about Kamaru Usman here. We’re talking about Nate Diaz. Nate has won one fight in five years. We’re trying to figure this out thing out with him. He probably should go on and fight Jake Paul. That’s a fight that makes sense,” White concluded.

Nate Diaz’s last victory in the Octagon was against Anthony Pettis at UFC 241 back in 2019. Three months later, he lost to Jorge Masvidal by doctor stoppage after the 3rd round of their main event bout at Madison Square Garden for the BMF (Bad Motherf*****) title.

As for Jake Paul, he announced on Twitter that he plans on fighting Tommy Fury in Madison Square Garden on Saturday, August 6th.

There is currently no word on when Nate Diaz’s final fight on his UFC contract will take place or who it will be against.

What are your thoughts of Nate’s war with the UFC? Would you want to see him put on some boxing gloves and go head-to-head with Paul?