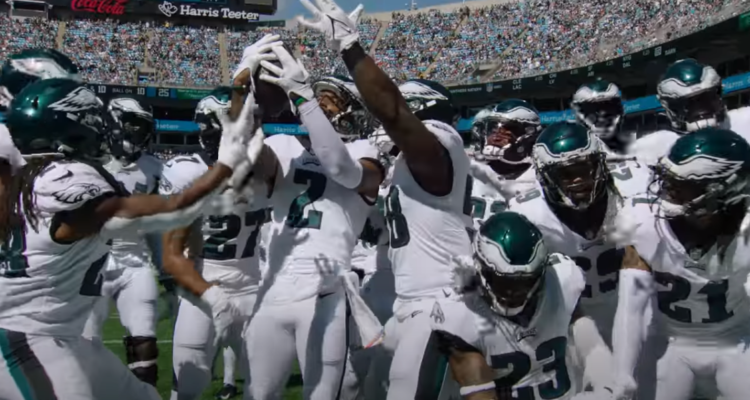 On Friday, all Philadelphia sports teams including the Eagles (NFL), the Flyers (NHL), the 76ers (NBA), The Phillies (MLB), and the Union (MLS) made a joint statement calling on new gun control legislation in the wake of a massive spike in gun crime in the city over the last couple of years.

All five sports franchises shared a joint message on social media stating “In 2021, 497 people were killed because of gun violence in Philadelphia. Too many lives have been lost in our communities.”

The Philadelphia Eagles took their call to end gun violence a step further and made a separate statement calling for a ban on “assault rifles” and “high capacity magazines.”

Jeffrey Lurie, Philadelphia Eagles Chairman & CEO in a full press release said the following, “These unspeakable tragedies wreak havoc in our communities and continue to occur with alarming frequency. As we search for ways to effect positive change in our society, we pray for those grieving in Philadelphia and around our country.”

Lurie continued, “These senseless acts of violence will not cease to occur without a concerted effort from those who govern our nation and make public policy. As a country, we need to call upon our lawmakers to enact tangible change and address this public crisis through appropriate gun safety legislation. These horrific disasters continue to occur across the United States. That is completely unacceptable and disheartening. We are faced with an epidemic plaguing our communities, and my hope is that we can influence our elected officials to create and pass legislation so the people in this country can feel safe when they leave their homes.”

“Enough is enough! Assault weapons loaded with high-capacity magazines are a clear threat to public safety and should be banned. Furthermore, research shows that if a federal ban was still in place for assault weapons, there would be 70 percent fewer mass shooting deaths. Additionally, a mandatory universal background check could have a significant impact on mass shootings by ensuring that these dangerous firearms are not getting into the wrong hands,” Lurie finished.

The statement comes just days after a PA lower court rejected the city’s latest attempt to create sweeping gun legislation for the city as the laws would violate the state’s “preemption” statutes.

Pennsylvania Democrats are now hoping the state’s Supreme Court will take up the appeal in hopes they will overturn a rejected proposal that mandates gun owners report lost or stolen firearms within 24 hours or face a fine to be determined by the city.

Last year, the city of Philadelphia racked up a record 559 murders amidst a massive crime wave following 2020’s BLM riots and Democrats’ call to defund the police in the wake of George Floyd’s death.

Philadelphia District Attorney Larry Krasner denied that there has been a rise in violent crime and said residents should not be concerned with rising crime.

Krasner later walked back these comments when crime in the city got even worse. Democrat Mayor Jim Kenney has been harshly criticized for failing to deal with the crime in his city over the last few years but thanks to the shooting in Texas, he is now calling for more gun laws and bans.

“On Gun Violence Awareness Day, I urge you to call your state and federal representatives. Until we address the availability and ease of access to firearms, we will always be fighting an uphill battle to stop our city’s violence and save lives. #WearOrange”