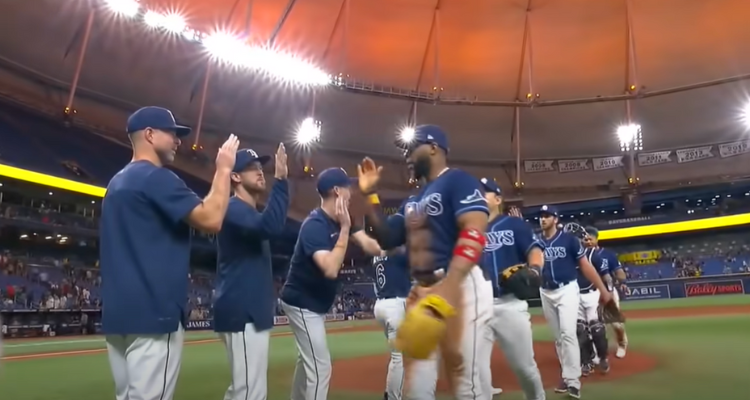 Jason Adam, Jalen Beeks, Brooks Raley, Jeffrey Springs, and Ryan Thompson opted not to wear the LGBTQ patches as part of the team’s annual “Pride Night” on Saturday that recognized the LGBTQ community. Now members of the media are taking out their displeasure with the five players for refusing to conform to the demands of the progressive lobby.

The New York Times put out a full editorial smearing the players of being enemies of the LGBT community. New York Times columnist Tyler Kepner accused the Tampa Bay Rays of allowing a few players to undermine the team’s support for the gay community by allowing them to opt out of wearing the team’s pride logo last weekend.

Kepner writes, “By allowing the players to opt-out of the promotion and to use the platform to endorse an opposite viewpoint, the Rays undercut the message of inclusion they were trying to send. Words like ‘lifestyle’ and ‘behavior’ are widely known tropes often interpreted as a polite cover for condemning gay culture.”

Kepner argues that the five players should not have been allowed to refuse their support for LGBTQ culture, an argument parroted by ESPN’s Sarah Spain and others on the program Around The Horn.

An argument that is in direct opposition to the 1st and 14th amendments of the United States of America.

“Pride is about inclusion. So you don’t love them and you don’t welcome them if you’re not willing to wear the patch,” Spain said.

Kepner and Spain weren’t the only ones who felt this way. Multiple media outlets have come out to criticize the players for refusing to wear the LGBTQ patches. Keith Olbermann went after Rays pitcher Jason Adam by slamming his understanding of the Bible.

He wrote on Twitter, “Show me where Jesus said this, Jason Adam of the Rays. You can’t, because he didn’t. And tell me how you square not ‘encouraging’ heredity, with making the people you’re shaming feel ‘safe.’ You can’t. Maybe you should read the Bible once or twice.”

LGBTQ sports writer Cyd Zeigler joined in claiming wear LGBTQ colors doesn’t violate the bible. “Will someone please show me the Bible passage that says “Thou shalt not wear a rainbow on thou’s clothing”…”

Tampa Pride president Carrie West said the players who refused to wear the Pride logos were ‘hiding behind their religion’ and had “shamed” the club’s work supporting the LGBT+ community.

West told the Independent, “To not say Thank You and get snubbed from the five players for Your Support and getting the $$$ for top salary dollars is truly a SHAME to be reckoned with! DO NOT HIDE BEHIND RELIGION! YOU HAVE ALREADY SHOWN YOUR COLORS.”

Tampa Bay has not only drawn the ire of progressives but conservatives as well. Last week, the Rays went on an anti-gun tirade on social media in protest of the Texas school shooting that killed 19, mostly children.

Instead of posting game updates, the team posted multiple stats in favor of Democrat-backed gun control and gun ban bills including donating $50,000 to the Michael Bloomberg-affiliated Everytown for Gun Safety’s Support Fund.

DeSantis said that companies are free to engage or not engage with whatever discourse they want but he finds it wholly inappropriate to subsidize the political activism of any particular corporation.

“We were not in a situation where the use of tax dollars for a professional stadium would have been a prudent use, and again, you know, I set that limit as to what we were going to spend and we made sure that we were doing that.” he added.

What do you make of these attacks on the Tampa Bay Ray players?