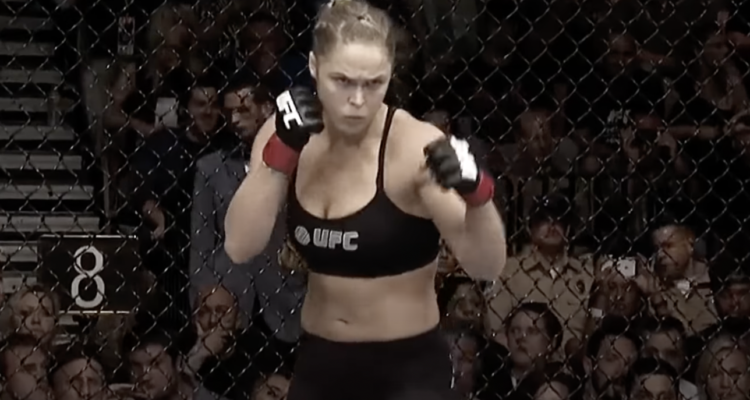 “Rowdy” Ronda Rousey’s MMA days might be far behind her, but the former UFC champion has recently said she would gladly make a return to the octagon (or in her own backyard for that matter) for a chance to fight Gina Carano.

Rousey is arguably the biggest female stars in the history of MMA, as well as one of the most popular fighters to ever compete in the UFC. She went 13-2 in her MMA career between Strikeforce and the UFC, but after back-to-back knockout losses by the likes of Holly Holm and Amanda Nunes, she retired from the sport and has sworn to not return to MMA. Rousey has since shifted careers into the world of pro-wrestling.

Rousey elaborated during the interview that “if she [Carano] ever was like, ‘Ronda, I wanna fight you tomorrow at 205 pounds’… if she wanted to come into my backyard and do the Rocky thing or, you know, ding, ding and we just do it in the backyard, I don’t care.”

Rousey 35, was inducted into the UFC Hall of Fame in 2018 and still holds the record for the most title defenses in the UFC’s Women’s Bantamweight division at six. Rousey is currently the SmackDown Women’s Champion for World Wrestling Entertainment.

Gina Carano is widely considered to be one of the pioneers of women’s MMA, having fought 7-1 during her career. In the mid-2000’s, Carano was a rising star in organizations such as Elite, and her 2009 fight with Cris “Cyborg” Santos marked the first time two women headlined a major MMA event.

Meanwhile, Carano continues to act with her latest film “Terror On The Prairie” available exclusively through The Daily Wire’s streaming service.

What are your thoughts? Would you want to see Carano and Rousey square off?