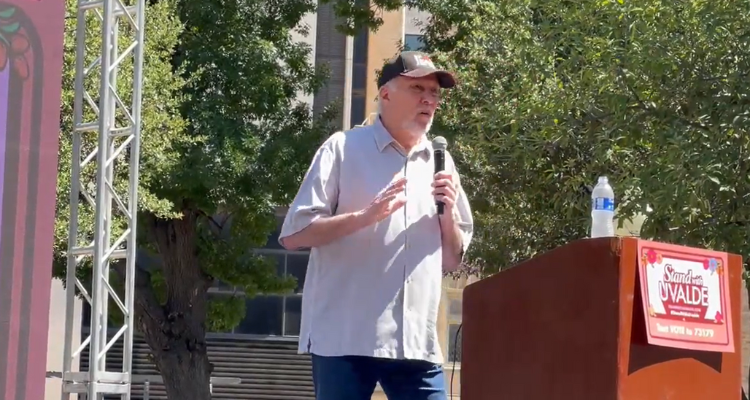 San Antonio Spurs head coach Gregg Popovich recently gave a speech at the Stand With Uvalde event where he claimed that white men over 50 years old are screwing up everyone’s lives.

Stand with Uvalde was a political rally held on June 4th by the organization Voto Latino described as a “call-to-action event … in support of the families and community suffering in the wake of mass shooting in Uvalde, and to demand action to prevent similar preventable tragedies.”

During his speech at the event Popovich stated, “We’ve got to get them all out next election. And we’ve got to vote them out of there so we can save our children.”

He then blamed white men over 50, “‘Cause I’m sick and tired of 50 and 60 and 70-year-old white men screwing up all of our lives because they’re selfish and really care about nothing else but their position. They’ll say, ‘Oh! That’s unpatriotic.’ or ‘That’s mean.’ No, it’s freaking true.”

As he wound down his speech, he added, “Please, take seriously the fact that you demand to stop being lied to and treated like your idiots. They are the people who are almost too smart because they think they’re tricking us. And the only way we can get that message is if we vote. So get after it. Stick together with it and save our children.”

“I’m sick and tired of 50 and 60 and 70 year old white men screwing up all or lives because they are selfish and really care about nothing else but their position,” Gregg Popovich said towards then of his speech. #StandWithUvalde pic.twitter.com/zTJ8Lq4Npb

Earlier in his speech, Popovich called for a complete and total gun ban while criticizing Texas Senator Ted Cruz.

“But here, we keep killing our children. Why is that? He could not answer it,” Popovich said. “He got defensive. And for a smart man he was tongue-tied. And he came back with the ole phrase, ‘Well, I’m sad that you don’t think America is exceptional.’ What the hell does that mean? We’re exceptional all right. We’re exceptional because we’re the only country that’s killing our kids with all these damn guns.”

Popovich talked about how Texas should get its political officials in power and put them in a room until they can come up with solutions. He asked “how many more is it going to take?” And ended his statement with “Get off your ass.” pic.twitter.com/BlqVXPwobV

However, Human Events Daily host Jack Posobiec shared a chart documenting gun homicides per 100,000 guns owned by country based on data from GunPolicy.org.

As you can see the chart shows that the United States of America only clocks in at 5.49 homicides per 100,000 guns owned. Far lower than numerous South American and Central American countries like Mexico, El Salvador, and Brazil.

KENS5 also reported that Popovich took issue with Texas Governor Greg Abbott removing Beto O’Rourke after the failed politician tried to grand stand in the middle of a press conference in regards to the shooting at Uvalde.

Popovich said, “The first reaction of the people up on the dais there was ‘You’re out of line.’ Who’s out of line? You’re out of line because you haven’t done crap and 19 more people were murdered. It’s just incredible, they think we’re stupid.”

What do you make of Popovich’s comments about white men and his call to ban all guns?