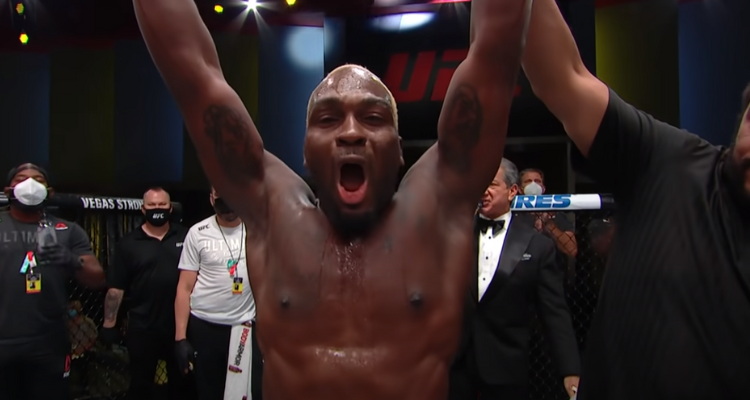 A drag queen event at a gay bar in Dallas, Texas has angered quite a few people over the weekend due to some of the people who were in attendance at the show…children.

On Saturday, the Mr. Misster Bar in Dallas promoted a “Drag The Kids To Pride” event that actively encouraged parents to bring their kids to the drag show.

When video of the event hit social media, users were actively outraged by the fact that young children were seen giving money to drag queens as they twerked in front of the minors.

Other videos showed drag queens dancing on a runway with a explicit pink neon sign that read “IT’S NOT GONNA LICK ITSELF.”

Kids also danced alongside drag queens while their parents looked on. The event was met with outrage by protesters outside of the nightclub.

Protesters & counter-protesters confront each other outside the Mr. Misster bar after a controversial event announcement allowing kids to dance with drag queens inside.

One of the people who were upset was UFC Middleweight contender Derek Brunson.

The 38-year-old fighter is currently the #4 ranked fighter in UFC’s middleweight division. Brunson shared photos of the event and commented on his displeasure with what he saw on Twitter in a series of posts.

“This is bit much. Children at a provocative drag show… Can we protect our children more in today’s society . Children don’t need to be at strip clubs , or any provocative show throwing money. SMFH . *read the message on the board in the background’ …”

This is bit much . Children at a provocative drag show… Can we protect our children more in today’s society . Children don’t need to be at strip clubs , or any provocative show throwing money . SMFH 🤢 *read the message on the board in the background” … pic.twitter.com/LwaNqjaba8

When progressives on Twitter tried to call Brunson a homophobe for having a problem with drag queens twerking in front of children in a bar for money, he responded by explaining exactly what was wrong with the situation.

‘It’s not gonna lick itself’ sign, throwing dollars, twerking in splits right in front of kids. Search the event to see more. And there’s nothing against the LGBTQ community. It’s more about protecting kids, their minds aren’t mature enough for these types of behaviors.” Brunson said.

Derek Brunson went on to compare the event to allowing children into a strip club. He said he has no issue with the LGBTQ community believing such provocative content is too much for children.

He tweeted, “It’ll be the same response from me if pictures of children in a strip club was floating around the internet . FYI I’m not god , I don’t have no problem with gay people . They’re some of the coolest folks . But this is some BS”

Brunson hasn’t been the only person in the world of MMA who has recently called out the Pride-themed events. Former UFC fighter Jake Shields criticized LGBTQ Pride month in a series of tweets stating that he is tired of seeing Pride celebrations.

“It’s not even June and I’m already sick of pride month,” he tweeted towards the end of May.

He followed that Tweet up by stating, “I don’t care if you are gay but you really Don’t need an entire month to celebrate that you like butt sex.”

He then noted, “people seem to think that me believing we don’t need a month celebrating Someone’s sexuality means I don’t like gays.  This is completely false.”

What do you make of Brunson’s comments What about this drag show in Dallas with young children?