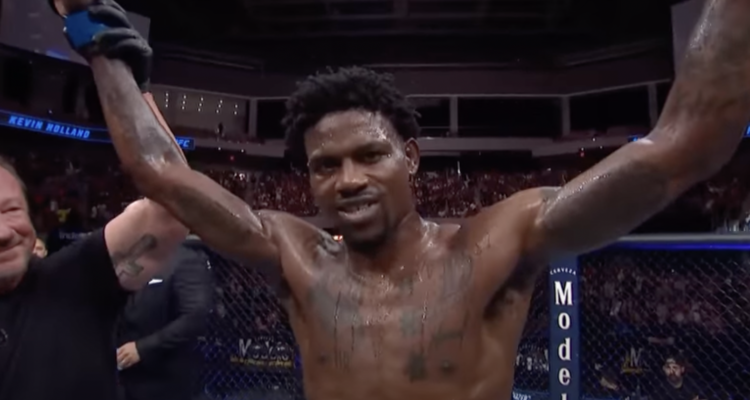 UFC fighter Kevin Holland has said on a recent podcast appearance that after taking some psychedelic mushrooms, the 29-year old fighter has seen visions of the future in which he will become a UFC Welterweight Champion.

While appearing as a guest on “The Fighter vs. The Writer” podcast, Holland spoke of the psychedelic episode that has only helped reinforce his drive to compete and win. He said stoically, “mark my f****** words. I’m going to be the champ. I popped some [mushrooms] about a couple of weeks ago and I had these visions, and I’m going to be champ.”

This uncommon form of validation came before his victory by submission over Tim Means at UFC Austin this past weekend, adding to the sense that Holland’s “vision” may be onto something.

Whether the vision of future glory played into his eventual success over Tim Means or was just an odd coincidence, Holland has always been a formidable opponent. According to ESPN, his professional record is currently 22-7, boasting 11 total TKOs.

Holland is riding high not only because of his recent win and his newfound psychedelic edge, but also from the attention he received on the eve of his fight in Texas in which he chased down a would-be perfume thief and caught them before they could escape. Holland’s manager confirmed the fighter’s act of braver Friday night, and also added that the store owner was more than happy to have the stolen merchandise returned.

What do you think of Holland’s “visions?”