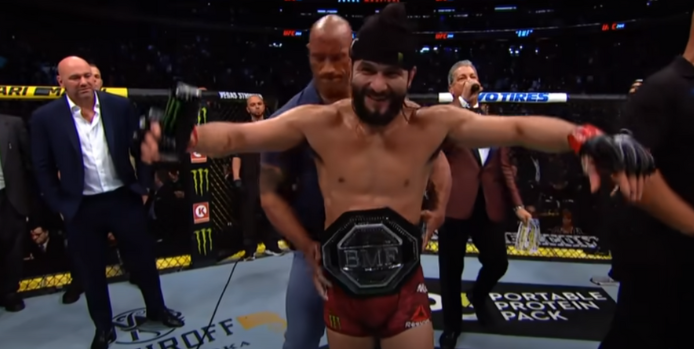 UFC Welterweight contender Jorge Masvidal, who is ranked as the 8th best Welterweight in the UFC, recently called out anti-Donald Trump virtue signaling NBA players after sharing a photo of gasoline prices over $9 in California.

Masvidal wrote on Twitter back on June 3rd, “Cali I feel for you guys. They are saying it’s supposed to go even higher. Buying food and just trying to get to work is gonna start to not even be possible.”

“Might be time to start protesting this by hitting the streets,” he added.

In a follow-up tweet, Masvidal wrote, “And where the hell are all the basket ball players and blue check marks that said if we get rid of Trump it will get better?”

“These people don’t care about you because they making millions. No one cares about you and your family but you! Wake up and smell the cafesito,” he declared.

While Masvidal doesn’t mention any names, there were quite a few NBA players who celebrated Donald Trump’s defeat in the 2020 election to current President Joe Biden.

Atlanta Hawks’ Trae Young tweeted back in November 2020, “You love to see it..” He then shared a tweet from reporter Jason Gallagher showing a video where Georgia turns from red to blue.

Philadelphia 76ers player Tobias Harris reacted to a report from Rex Chapman claiming that Biden took the lead in Pennsylvania writing, “Love it!!”

Fellow 76ers players Joel Embiid responded to one of his own tweets from 2016 that said, “Well America is tanking!!! All we can do is Trust The Process…”

His response to that tweet read, “Well America TRUSTED THE PROCESS and it paid off #TheProcess.”

Minnesota Timberwolves’ Karl-Anthony Towns tweeted, “This is a moment the country NEEDED and a moment WOMEN deserved.”

He then shared a USA Today Politics tweet about Senator Kamala Harris.

James responded writing, “YO we back up in there my G!!! I’m taking my tequila and vino too!”

Masvidal lost his last fight to Colby Covington in an unanimous decision at UFC 272. Before that he was defeated by TKO in Round 2 by current Welterweight Champion Kamaru Usman.

It’s unclear when he will next appear in the Octagon.

What do you make of Masvidal’s commentary about basketball players and increased gas and food prices?