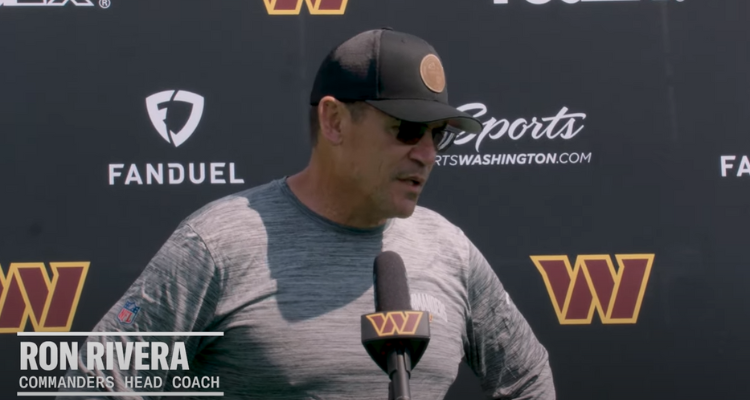 Washington Commanders Head Coach Ron Rivera punished the team’s Defensive Coordinator Jack Del Rio for his comments about January 6th despite claiming it was his constitutional right to make the comments.

Del Rio initially took to Twitter questioning why the riots during the summer of 2020 that swept the country are never discussed.

He wrote on Twitter, “Would love to understand ‘the whole story ‘ about why the summer of riots, looting, burning and the destruction of personal property is never discussed but this is ???”

The tweet was in response to Brookings Institute Senior Fellow Norm Eisen who wrote, “As the 1/6 Committee hearings draw near, we must understand the whole story of January 6th.”

Eisen added, “In our new Brookings Governance report, we offer a guide, including potential federal and state criminal charges for Trump and his allies.”

Del Rio would defend his tweet as well as others while addressing the media.

Del Rio would then apologize for describing the riot at the Capitol as a “dust up.”

He wrote on Twitter, “I made comments earlier today in referencing the attack that took place on the United States Capitol on January 6, 2021. Referencing that situation as a dust-up was irresponsible and negligent and I am sorry.”

While he apologized for describing the riot as a dust up, he did double down on his condemnation of the riots that raged across the country in the summer of 2022. He added, “I stand by my comments condemning violence in communities across the country. I say that while also expressing my support as American citizen for peaceful protest in our country.”

Now, the Washington Commander’s head coach Ron Rivera issued a statement shared to the team’s official Twitter account revealing he fined Del Rio $100,000 for his comments while also declaring the riot an “act of domestic terrorism.”

Rivera’s statement begins, “This morning I met with Coach Del Rio to express how disappointed I am in his comments on Wednesday. His comments do not reflect the organization’s views and are extremely hurtful to our great community here in the DMV.”

He continued, “As we saw last night in the hearings, what happened on the Capitol on January 6, 2021 was an act of domestic terrorism. A group of citizens attempted to overturn the results of a free and fair election, and as a result, lives were lost and the Capitol building was damaged.”

This part of Rivera’s statement is actually false. Only one person died during the riot and that was President Donald Trump supporter and Air Force veteran, 35-year-old Ashli Babbit. Babbit was shot and killed by Capitol Police Lieutenant Michael Byrd.

No one else died during the riot. So the claim that “lives were lost” is simply not true.

Nevertheless, Rivera’s statement continued, “Coach Del Rio did apologize for his comments on Wednesday and he understands the distinction between the events of that dark day and peaceful protests, which are a hallmark of our democracy. He does have the right to voice his opinion as a citizen of the Untied States and it most certainly is his constitutional right to do so. However, words have consequences and his words hurt a lot of people in our community.”

“I want to make it clear that our organization will not tolerate any equivalency between those who demanded justice in the wake of George Floyd’s murder and the actions of those on January 6 who sought to topple our government,” Rivera added.

Ironically, after claiming Rivera has the constitutional right to express his opinions, he then announced he was fining Del Rio for doing so.

He wrote, “After reflecting on the situation and circumstances, I have decided to fine Coach Del Rio $100,000, which the team will donate to the United States Capitol Police Memorial Fund.”

“I feel strongly that after our conversation this morning, he will have a greater understanding for the impact of his language and the values that our team stands for,” he concluded.

NEXT: Washington Commanders Defensive Coordinator Jack Del Rio Questions Why “The Summer Of Riots, Looting, Burning, And The Destruction Of Personal Property” Is Not Discussed