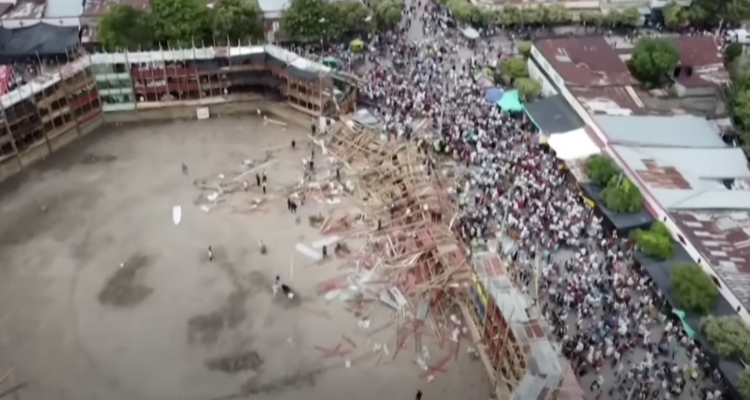 Tragedy struck in the town of El Espinal, Columbia, late last week when a stand completely collapsed during a bullfight, leading to hundreds of mild to severe injuries in addition to four deaths, including a baby.

The footage of the collapse which has made its rounds on social media, shows the section of the stand which begins to cave in on itself, pulling down spectators beneath the rubble as others jump off to escape.

“I was in box 34 on the third floor, a very high part,” a survivor of the collapse told reporters from the local newspaper, describing how tall the stands were and the short reaction time those around him had as they all felt the floor beneath them give way.

Another vantage point shows the additional terror as fans who jumped into the bullring came in close contact with the still roaming bull, who luckily didn’t harm anyone including those that ran over to attempt to clear the debris off of those unfortunately trapped beneath it all.

In an interview with a local radio station as news of the collapse broke out, the provincial governor Jose Ricardo Orozco stated that of the hundreds injured, four had currently died as an immediate result of the collapse, “two women, a man and a minor.”

“[Approximately] 800 people fell,” Orozco added. Estimates from a review of the incident show that roughly a hundred people could fit inside each of the connected sections of the stadium. A report from the Washington Post states that the stands were built from gadua bamboo, which loses strength over time.

According to later reports, around several hundred people received emergency care and treatment for their injuries at San Rafael hospital in town, while around sixty received care from their collapse related injuries from other hospitals nearby.

An official from the regional civil defense agency spoke to the local press, stating that due to the stand’s poor bamboo structure, it was only a matter of time before a tragedy such as this occurred.