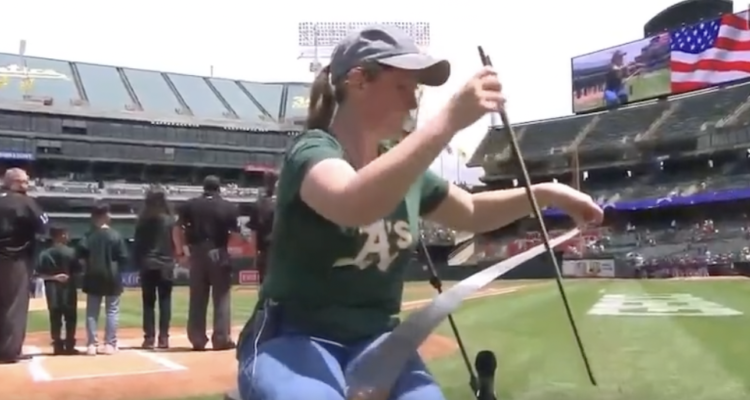 You’ve probably heard the National Anthem played in different styles a time or two, but have you ever heard it played with a saw? Yes, a saw, the same tool you use to cut down trees with. Well, move over Jimmy Hendrix, someone new is taking this patriotic classic to all new heights.

Self-described “musical saw player” Caroline McCaskey played the “Star-Spangled Banner” using nothing but a violin bow and a saw on Sunday before the start of the match between the Oakland Athletics and the Boston Red Sox.

She stole the show by surprising the audience with a performance that has more people talking about how she played it than who actually ended up winning the game.

Check it out her captivating rendition of the National Anthem yourself below.

McCaskey didn’t just pick up a saw and a bow randomly and become an overnight sensation. She’s classically trained in the violin, viola, cello and as a composer.

She has been playing in contests and recitals across the country for more than a decade, including the 2019 U.S. National Scottish Fiddle Championship in Edinboro, PA, which she earned the honor of winning.

After that fateful encounter, the rest was history as McCaskey sought opportunities from other influential saw musicians such as David Weiss and Morgan Cowin.

When she’s not taking the internet by storm, she lives in Colorado and operates a private studio for students as well as teaching at various musical summer camps.

If you start seeing an uptick in the number of students wanting to learn how to play this 19th century musical novelty, you might have McClaskey to thank for that.

What do you make of McCaskey’s rendition of The Star-Spangled Banner?