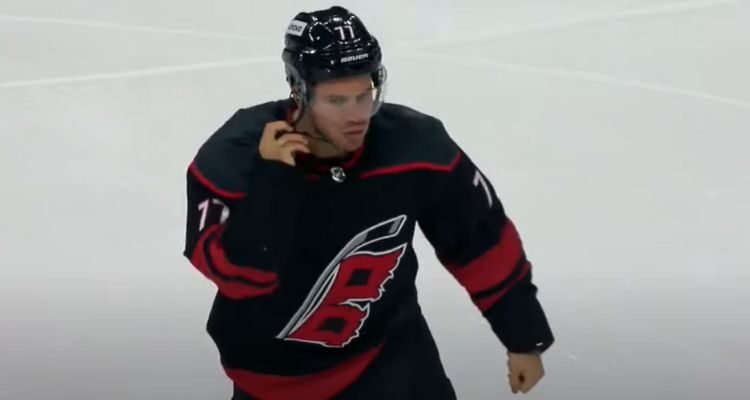 Numerous Philadelphia Flyers fans were not happy after the organization acquired defenseman Tony DeAngelo in a trade with the Carolina Hurricanes.

DeAngelo racked up huge numbers while in Carolina scoring 10 goals and racking up 41 assists for a total of 51 points. He also had +30 +/- rating and had 56 penalty minutes.

Before being picked up by Carolina, DeAngelo scored 15 goals and had 38 assists for a total of 53 points with the New York Rangers in 2019-2020, a career best.

They went on to share a message from the team’s assistant captain Kevin Hayes on DeAngelo becoming a Flyer saying, “Tony is one of the most loyal teammates I’ve ever played with. He will have every guy in that locker rooms back. He is a passionate person who plays with an edge while being one of the most skilled D men in the league.”

“The fans here are going to absolutely love him. Ever since I met him we always joked about him playing in Philly. Everyone should be excited for opening night,” he concluded.

DeAngelo shared his own excitement on Instagram writing, “What a feeling. From as far back as I can remember my only dream in life was to be a Philadelphia Flyer. Not many words can describe how this feels. I couldn’t be more honored, excited, and proud to be a Flyer.”

He added, “As exciting as the trade is there will be no better feeling then putting on the orange and black for the first time. Can’t wait! LETS GO FLYERS.”

Despite the excitement from Hayes and DeAngelo, Flyers fans accused DeAngelo of racism.

DoABarrellRollx wrote, “So basically what I’m saying is, Tony DeAngelo is a loser hot head who has racism baked into him that he likely won’t change.”

“Rangers gave this guy away a year ago just to get his presence away from the team,” he then claimed.

StrangeCharlie_ tweeted, “People are so delusional about Tony DeAngelo’s playing ability. Not only is he racist, but he’s also an average player that adds almost nothing to the team. Stop pretending he’s anything more than mediocre in order to defend liking a racist player. Just say you can excuse racism.”

“Been a flyers fan since I was a toddler& this is so f***ing disappointing. We don’t want that s**t in Philly. Feed him to Gritty,” the user added.

The accusations of racism appear to stem from a suspension during his career in the OHL for violating the league’s policy on “homophobic, racist, and sexist language.” However, it’s unclear what exactly he said.

Back in February 2014, Yahoo! Sports’ Sunaya Sapurji reported, “what he said was directed at a teammate. The team is tightlipped about what was said and to whom, but it was bad enough for Letowski to take action without waiting for the league to intervene.”

Sarnia Sting’s head coach Trevor Letowski commented on his descisison to suspend DeAngelo saying, “Internally as an organization we made the decision. It was obviously a serious matter. Any time it involves one of our players there has to be a certain respect level. We respect all of our players and it was pretty serious.”

He further added, “We handled it internally for the first day and then we felt it was important that the league became involved … we completely support the league’s decision.”

DeAngelo was suspended by the OHL for eight games.

DeAngelo previously addressed the accusations when he signed with Carolina last year saying, “I would say to them that I’ve learned. It’s never happened again and I was regretful of it. I’m still friends with that guy and I’ve apologized to him.”

“I did what I had to do there and I wanted to do it. I had to go to some counseling classes back then. I don’t know what you would put them as. I don’t think you would describe them as anger management, more like sports psychology would make more sense to say, I guess. But I regretted what I said,” he continued.

He would address it again during a digital press conference via Zoom, “I’m absolutely not racist at all. There was something I said back in junior. People don’t know what it is, I’m not going to go into it. But it was something that I regretted. It was a friend of mine on my team that we had an argument and we remain friends.”

“And the other stories that have come out here are just totally false and that’s why I think the teams in this league have known that,” DeAngelo asserted. “So you get pushback because there’s some stuff that goes out there that’s inaccurate, but I think the people are going to get to know me well and really enjoy my game; and the kind of person I am off the ice as well.”

He concluded, “I don’t need to say too much about that. I’m just looking forward to proving it as I did in Carolina this past year. I’m going to do the same thing here with the fans.”

What do you make of the accusations against Tony DeAngelo?