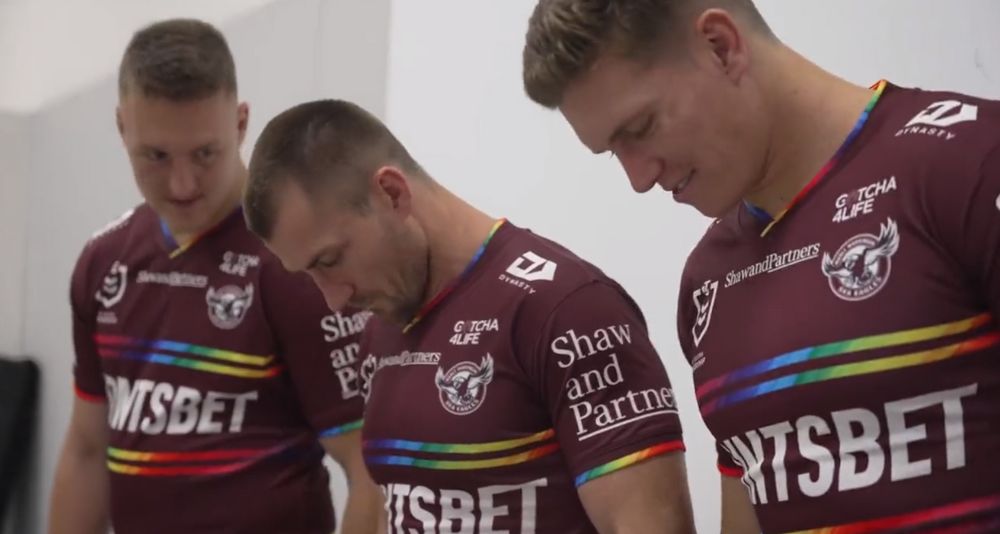 A group of seven Australian rugby players from the Manly Warringah Sea Eagles in Sydney have made it very clear they are willing to completely boycott an upcoming match this week after it was revealed that the team would be wearing LGBTQ+ pride themed rainbow jersey’s for the game.

On Sunday night, the Manly Warringah Sea Eagle’s management revealed the upcoming uniforms for the match featured pride colors in place of the traditional white stripes that make up the team’s traditional colors.

Seven players immediately came together to announce they would not be participating in this week’s match if forced to wear the pride themed uniforms, claiming the reason for their opposition is based on religious grounds.

After the seven players announced their intentions, Manly put together an emergency meeting shortly after and decided to go ahead and pull the players from the upcoming match this week.

Sea Eagle’s coach Des Hasler has come out in support of the seven players in their decision not to participate in this week’s game, according to the Sydney Morning Herald. However, with that support also comes public opposition.

Former rugby player Ian Roberts, who came out as gay while actively playing in the 1990’s, was an outspoken advocate for the pride themed jerseys to be worn, and has also stated his opinion on the player’s choice not to participate.

“I try to see it from all perspectives but this breaks my heart,” said Roberts in an interview discussing the matter with The Daily Telegraph. “It’s sad and uncomfortable. As an older gay man, this isn’t unfamiliar. I did wonder whether there would be any religious pushback. That’s why I think the NRL have never had a Pride round.”

“I can promise you every young kid on the northern beaches who is dealing with their sexuality would have heard about this,” Roberts added.

Sports commentator Matt Bungard jumped over to Twitter to call the players homophobes and hypocrites.

“I don’t want to hear one single thing about ‘respecting other people’s opinions’ or using religion as a crutch to hide behind while being homophobic,” said Bungard. “No issues playing at a stadium covered in alcohol and gambling sponsors, which is also a sin. What a joke.”

Code Sports contributor Pam Whaley also posted online, “What infuriates me (and always has) is that players will boycott over a rainbow but never boycott a teammate if he’s been accused of violence against women or any other morally reprehensible behavior that they would all agree they don’t condone. I do not understand it.”

Gary Wolman, the interim Manly chief executive was contacted by Australian press but was unable to comment.

What do you think of the player’s decision to boycott the upcoming match because of the pride jersey?