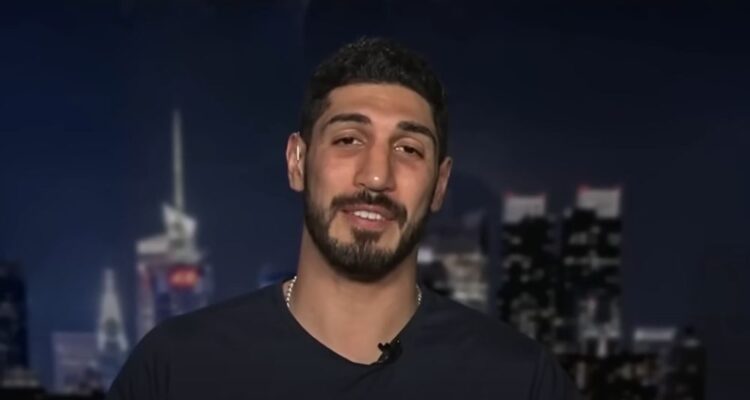 Enes Kanter Freedom, a former center for the Boston Celtics, reacted to a number of audio recordings obtained by Tucker Carlson Tonight showing NBA executives and owners making it clear they make and enforce policies based on their Chinese masters.

In the first clip, Klempner says, “I got off the phone with the General Counsel of the NBA and he wants to now have a conversation about — their concern right now is not so much what you are saying off the court, but what it is that you’re saying on the court, when you step onto the court.”

It was a reference to Enes Kanter Freedom wearing shoes that read “Free Tibet” a clear criticism of China’s occupation of the country since 1951.

The second clip sees Milwaukee Bucks owner Marc Lasry very clearly explaining how and why the NBA bows to China. He says, “China’s taken a very aggressive stance, which is ‘hey you want to b**** about us, you’re out.’ Right? Which is I get it. There’s nothing… It’s business. So their view is, look, you want to be in our country, you wanna do things, if you’re gonna complain about us, you’re not allowed.”

“So what happens for the NBA, the NBA is in a box,” the clip concludes.

In what appears to be another clip he says, “There’s not rule I’m aware of that you’re violating now. To me, you know, I think it’s also — look, at the end of the day, we’re also a business.”

Kanter Freedom reacted to this clip on Tucker Carlson Tonight saying, “The NBA has finally gotten exposed. And this is the evidence of how 100% American made company is run by the Chinese dictatorship. And wake up America, this is the league that you have been supporting and watching. Enough is enough. And this is unacceptable.”

He continued, “They are mad that someone from the inside that played 11 years in this league finally exposed them. And I’m saying it again. Enough is enough. Stop bowing down to dictatorships.”

Later in the interview, Carlson provided the NBA’s statement in response to the audio recordings. It stated, “Adam Silver made it clear that we support players – including Mr. Freedom – expressing their views on matters that are important them.”

Enes Kanter Freedom reacted to the statement saying, “The recordings said something different. It’s just sad to see how these people can still lie to the American people. How they can bowing down to these dictatorships. They will care about social justice until it affects their money and business. NBA pretends to care about social justice in America, but when that affects their business they’re silent.”

“And if any player goes out there, says anything about it, they’re going to do everything they can to silence you,” he said. “Look, listen, I’m 30-years-old and they are pushing me to retire at the age of 30. And I’m not retiring. I’m going to fight ’til I get back to that league again and keep exposing them. And that’s why I can’t just take this anymore,” he concluded.

He also shared more recordings to his Instagram. He prefaced one writing, “This is the conversation I had with NBA Commissioner Adam Silver, where he lies about whether the Boston Celtics games in China are banned or not & where he admits and say ‘At the end of the day we are a business.”

In a second one he wrote, “Every month, NBA players pay thousands of dollar to the NBAPA to protect their rights against NBA. Unfortunately that’s not the case if China is involved. Here’s another leaked recording exposing the NBA Players Union about begging me to take my shoes off & trying to silence me!”

He said, “The one thing I can say is NBA and Adam Silver is definitely one of the most evil, radical organization and one of the most radical commissioner out there in the world.”

“They stand up for things until it affects their money or business. And someone had to expose them and someone finally exposed them and from first hand,” he elaborated.

What do you make of this leaked audio and Enes Kanter Freedom’s comments about the NBA?

NEXT: Enes Kanter Freedom Rebukes LeBron James: “You Are Free To Leave Buddy Or You Can Even Volunteer For An Exchange For Her”