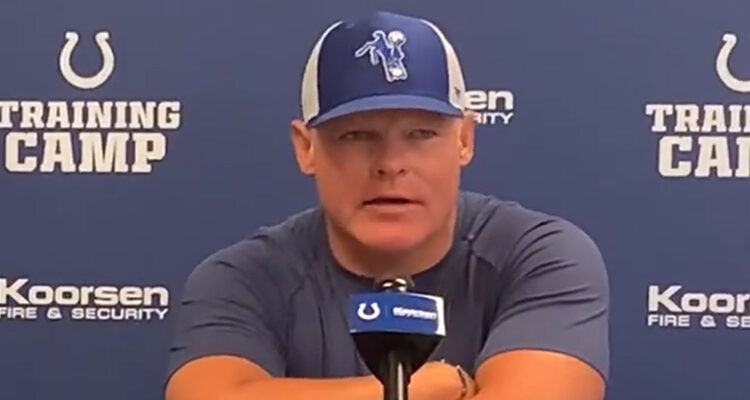 NFL training camps began this week, which means general managers, coaches, and players are once again spending more time with the media.

Diehard NFL fans look forward to it because they get to hear from the people they’re invested in talk about the upcoming season. Basically, the hype train to Super Bowl Sunday begins during training camp.

Indianapolis Colts general manager Chris Ballard decided this would be a good opportunity to lecture fans on the problem with our gun laws in the United States.

Ballard kicked off his press conference by offering condolences to the families involved in the Greenwood Park Mall shooting. It’s not relevant to the NFL or the Colts, but it’s an understandable gesture considering the mall is only about 10 miles from Lucas Oil Stadium, where the Colts play.

That alone would have been a nice way to recognize people in the community who were impacted by this senseless tragedy. Unfortunately, Ballard couldn’t help himself. Instead of worrying about the Colts, who only won nine games last season, he began focusing on political policy.

RELATED: Cincinnati Bengals Quarterback Joe Burrow: “If You’re Not Gonna Outlaw Everything, You Gotta At Least Make It Harder To Get Those Crazy Guns”

“To me, it’s a lot of common sense, and we lack it right now in this country. And it’s a shame,” Ballard said. “Highland Park, Uvalde, Greenwood, Buffalo. I mean, when does some common sense come in to play and when does this end? When do our elected officials actually do something about it instead of their own political gain? Both sides are completely wrong.”

You won’t see my caping for our failed two-party system, but generally speaking, the Republican Party is more likely to defend our 2nd Amendment rights. While critics like Ballard ponder about common sense, I do too in a different perspective—what part of “shall not be infringed” is unclear?

Three innocent people were tragically murdered by the gunman, but countless other lives were saved thanks to good Samaritan Elisjsha Dicken. The 22-year-old was exercising his right to bear arms when he came across the gunman. Dicken shot him several times with his 9mm pistol, killing him. This critical detail was intentionally left out of Ballard’s dishonest virtue signaling.

“I’m not anti-gun, but I’m anti-military-style weapons,” Ballard continued. “It blows my mind away that an 18-year-old kid can walk in and buy an AK-15 automatic weapon. That makes no sense. Zero. I just want to open up. It’s a shame that we live in a country that can’t come to an agreement because of politics on doing the right thing for our country. It makes zero sense. Zero. So anyways my prayers are with them.”

Ballard is not anti-military-style weapon, in spite of his claim—there is no such thing. The gun control debate comes down to who you believe should have the guns, not whether anyone should have them or not. Ballard simply believes the government should have those types of weapons so they can be used against you and me. He doesn’t want us to have them so we can protect ourselves. Our founders would roll over in their graves at that very idea.

The 2nd Amendment outlines our need to bear arms for the security of a free state. Perhaps Ballard can define what the “right thing” is because all he seems to be saying is the federal government should violate our Constitutional rights and prevent law-abiding citizens from protecting themselves against lunatics like the Greenwood Park Mall gunman.

“It’s a shame that you have to get up here and start something. You know, eventually we’ll get up and not have to talk about this. But right now we cannot remain silent on this issue.”

Ballard didn’t specify what he meant by holding people and politicians accountable. It’s all a bunch of generic, emotion-based nonsense which prevents you from having a serious adult conversation. Gun control advocates never specify what new gun control laws our elected officials could have passed that would’ve prevented mass shootings. There’s a reason for that—there isn’t one. With the technology of 3D printed guns and ammunition, the gun control debate as we know it is quickly becoming obsolete.

Ultimately, these are tragic, difficult situations that we can’t make sense out of. Everyone wants to see mass shootings end. When a person is so mentally deranged that they would shoot innocent people for no reason, how could anyone think they would follow the law on gun purchases? Or they wouldn’t find another way to murder people without a gun? There are already laws on the books, which criminals like that won’t follow. For example, murder is already illegal.

We do need to enforce the gun laws we already have. We do need to report alarming behavior if we see it. The FBI needs to do a better job of evaluating deadly threats. We do have to tackle the mental health crisis in this country. We do need more responsible, armed citizens who are willing to protect themselves. When seconds matter, police are minutes away and that’s presuming they’ll save you, which the Supreme Court has ruled they do not have an obligation to do. Ask the loved ones of the victims of Uvalde about that.

As long as free will resides, and deranged people are determined to carry out such an unspeakable act, we will have mass shootings. That’s a scary, unfair reality. As a society, we do everything we can to prevent that, and protect our loved ones.

I watch the NFL to escape from reality. Not to hear regurgitated left-wing talking points from someone so uninformed they believe the AR-15 is an AK-15.

Ballard has been labeled brave for his remarks, but that wasn’t brave. Brave was what the young man did to end the tragedy at the mall.

What do you think about Ballard’s remarks?

NEXT: White Sox Pitcher Liam Hendriks Claims “Protection Isn’t A Good Enough Reason To Get A Gun” In The Wake Of The Highland Park Shooting