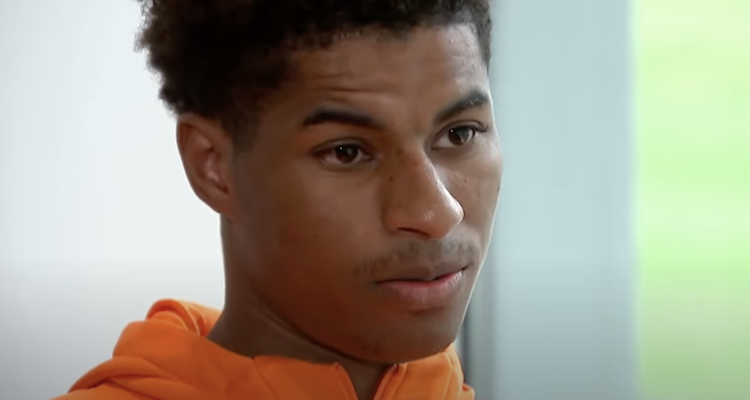 Professional footballer Marcus Rashford, forward for Manchester United and the England national team, is currently making headlines, as he believes white players would not have been shamed for missing penalties at Euro 2020.

Rashford, alongside Jadon Sancho and Bukayo Saka missed their respective penalty kicks at Euro 2020, which resulted in England being beaten on penalties following a 1-1 draw against Italy; ending the Lions’ 55-year wait to win a major trophy.

At the time, the Manchester United forward hit the post while teammates Sancho and Saka’s penalty kicks were denied by Italian goalkeeper Gianluigi Donnarumma during the Euro 2020 final on the 11th of July, 2021.

A couple of days later, Rashford revealed that he and his fellow teammates had been the subject of racist abuse following the Euro 2020 final.

He tweeted, “At least 70 racial slurs on my social accounts counted so far. For those working to make feel any worse than I already do, good luck trying.”

He added in a subsequent tweet, “I’m more outraged that one of the abusers that left a mountain of monkey emojis in my DM is a maths teacher with an open profile. He teaches children!! And knows that he can freely racially abuse without consequence…”

In a separate statement shared on social media, the English forward decalerd he would not apologise for he is writing, “I can take critique of my performance all day long, my penalty was not good enough, it should have gone in but I will never apologise for who I am and where I came from.”

Rashford concluded, “I’ve felt no prouder moment than wearing those three lions on my chest and seeing my family cheer me on in a crowd of tens of thousands.”

In a recent episode of UNINTERRUPTED’s The Shop, NBA super star LeBron James was joined by Marcus Rashford, wherein the 24-year-old player asserted that white players would not have gotten the same backlash he and his teammates got for missing those penalties last year.

James was also joined by The Shop creator Paul Rivera, Academy Award winner Daniel Kaluuya, and conceptual artist Rashid Johnson, as well as co-host Maverick Carter, who asked Rashford, “after the Euro, did that get overwhelming?”

Carter elaborated, “Because that was a bit different, right?” as James asked him to explain what he meant. “They played the final in the Euro against Italy, tough game.”

“It ended 1-1 and then overtime, and then it went to PKs, and unfortunate for England, the last three guys were black. They missed. They got hate. They got like, death threats, and it got out of hand,” he added.

Rashford replied, asserting, “There’s certain elements of sport you can speak about all day and you’ll never come to a bottom line, like, ‘That’s what should have happened,’ because it’s a sport based on opinion. So, like, I’ve had hate for scoring before. It might sound mad, but I have.”

The footballer was then asked by Carter, “Do you think it ever got you close to where you felt like breaking, like, ‘F—k, this is too much?”

“No, because as a forward you take risks all the time,” Rashford explained, adding, “If you’re not taking risks, you’re doing something wrong.”

The Shop creator Paul Rivera interjects, inquiring, “Do you think the hate would have been as insane if it was three white young kids that missed the penalty kick?” to which Rashford replied with a slightly contradicting statement.

“Honestly, no. That’s just the way I feel,” replied the Manchester United forward, adding, “I don’t think it would have been the same, but at the same time, I don’t think people would have noticed.”

He further elaborated, “I feel like they just reacted to how they felt, and whether it’s because it was three black guys or three white guys that’s how they felt.”

Interestingly, Rashford brings up the hate Manchester United legend David Beckham was subjected to following his participation at World Cup 1998, when the then 23-year-old midfielder earned himself a red card after kicking the leg of Argentinian player Diego Simeone.

“I remember when [David] Beckham was getting death threats and getting hate. So, it’s like…it happens, but they just wanted you to win,” Rashford continued, adding that such behaviour from hardcore fans is “toxic.”

What do you make of Marcus Rashford’s comments? Sound off your thoughts in the comments section down below or on social media.

NEXT: Woke BBC Presenter Eilidh Barbour Faces Backlash After Complaining About The Lack Of Diversity In The England Women’s Football Team