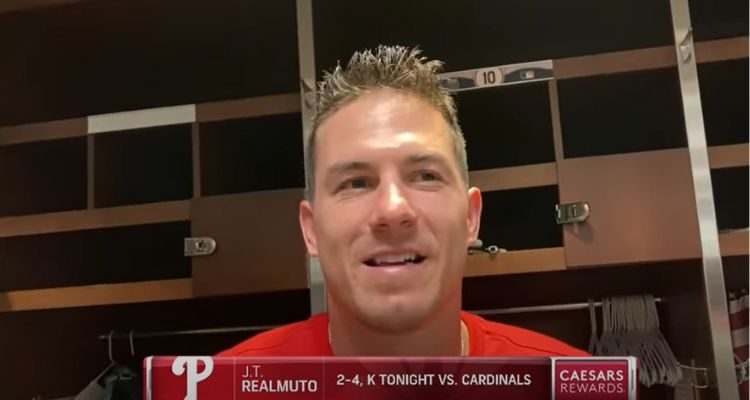 Phillies Catcher J.T. Realmuto On Missing Games Against Toronto Due To His Vaccination Status: “I’m Not Going To Let Canada Tell Me What I Do And Don’t Put In My Body”

Philadelphia Phillies Catcher J.T. Realmuto bluntly declared he would not be letting Canada tell him what to do with his body when he was questioned by the media about missing upcoming games against the Toronto Blue Jays.

Realmuto was first asked about how he felt about missing the games answering, “It’s an extremely unfortunate situation. Obviously, my teammates know how I feel about them and how bad I want to be out there with them. But it’s just unfortunate that I’m not able to make the trip.”

RELATED: John McEnroe Blasts Politicians For Refusing To Allow Novak Djokovic To Play In The US Open Over His Vaccination Status

He would then be asked what his reservations were to which he replied, “I’m a healthy 31-year-old professional athlete that I just didn’t feel a need to get it.”

“I’ve had Covid a couple times and super mild symptoms back when it first came out and when it came to decide whether I need a vaccine or not, talked with a couple doctors that I knew and told them my story and just really decided I didn’t think I needed it.”

He added, “And I wasn’t going to take it just because I was to, basically.”

A member of the media then noted he would be forfeiting quite a bit of his salary, but Realmuto sharply answered, “Yeah, but I mean what’s money when — I’m not going to let Canada tell me what I do and don’t put in my body for a little bit of money.”

“It’s just not worth it to me,” he concluded.

Another member of the press then questioned if Realmuto would get vaccinated if the Phillies ended up facing a Canadian team in the playoffs.

He answered, “I don’t want to speak on hypotheticals, but I mean I just hope by that point that it’s all figured out then we don’t have to deal with this anymore.”

According to Baseball Reference, Realmuto has had 275 at bats this year with 66 hits and 7 homeruns. He’s scored 39 runs and has 35 runs batted in (RBI) with 11 stolen bases.

Just Baseball ranks him as the third best catcher in Major League Baseball this year stating, “J.T. Realmuto is still among the elite catchers in baseball, especially on the defensive side.
Without much debate, he is still the best overall defender at the position.”

The Phillies lost their first game against the Blue Jays 4-3. They play them again tonight at 7:07 pm EDT. The game will air on NBC Sports Philadelphia.

Following the two game series against the Blue Jays the team heads to Florida where they will face off against the Marlins for a three game series before the All Star break.

What do you make of Realmuto’s comments?