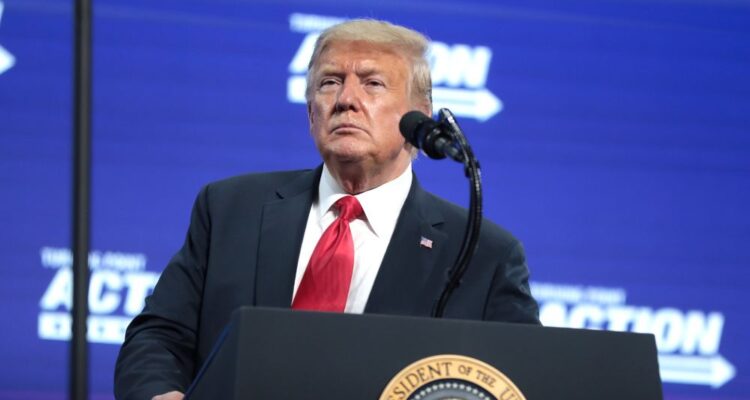 President of the United States Donald Trump speaking with supporters at an "An Address to Young Americans" event hosted by Students for Trump and Turning Point Action at Dream City Church in Phoenix, Arizona. Photo Credit: Gage Skidmore from Surprise, AZ, United States of America, CC BY-SA 2.0 , via Wikimedia Commons

During his speech, Trump stated, “If I were a basketball coach of the women’s team, I would be the greatest coach of all time.”

He continued, “I’m not a fan of Lebron James at all. I don’t like him, but I’d say, ‘LeBron, did you ever think of becoming a woman? Did you ever consider? Because I’d like to have you on my team. I’d love to have you on our team, LeBron.”

“But think of it, it’s so crazy what’s happening. So whether it’s politically correct, maybe it isn’t, I don’t know,” Trump added.

“LeBron, have you ever thought about becoming a woman?” 😂
– Donald Trump if he owned a WNBA team pic.twitter.com/zxj4DoLKS3

This isn’t the first time Trump has referenced James getting a sex reassignment surgery during one of his speeches. At a speech in Arizona n 2021 Trump said, “I’ll be honest though. Look, we all like to win. If I were a coach, I’d tell ya I wouldn’t be talking to too many women as we know women. I’d be getting some of these people that… they’re women.”

“Somebody said that if LeBron James ever decided to get the operation, how would he be? How would he be on the court? And by the way, LeBron James, you can have him. Did you see the basketball ratings, which were terrible, but they went up after his team was defeated.”

Trump says if he was coaching women’s sports, he would only recruit trans athletes, then speculates on Lebron James transitioning and playing women’s basketball. pic.twitter.com/Z7Wl0Vq3Fc

During his speech in Tampa on Saturday, Trump also made it clear there are only two genders. He said, “They want young people to feel shame and contempt for our country and for our heritage.”

“They believe in left wing gender ideology and toxic critical race theory. We believe in two genders. There are men. And there are women. Two genders. And we believe that all Americans of every background are created free and equal by the hand of almighty God. Let them say that. These are the principals we’re fighting to defend each and every day.”

What do you make of President Trump’s comments about LeBron James and gender?

NEXT: South Dakota Governor Kristi Noem Sounds Off On Lia Thomas’ Nomination For Woman Of The Year