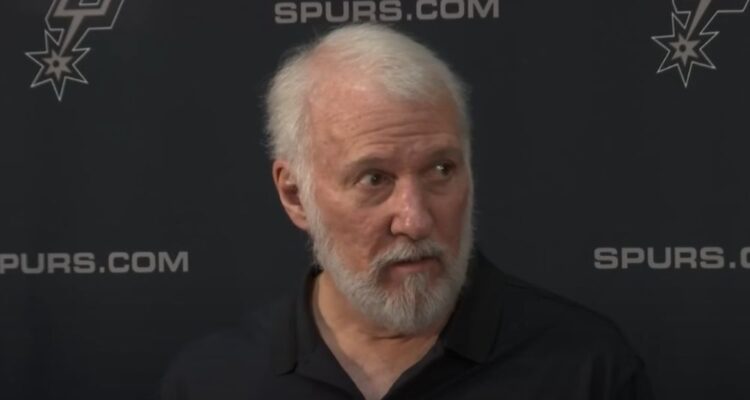 San Antonio Spurs coach Gregg Popovich recently bashed the United States of America as a racist country while presenting an award to Barry Scheck at a social justice summit organized by Jay-Z’s Roc Nation and the United Justice Coalition.

Roc Nation’s managing director of philanthropy Dania Diaz described the event to ABC News as “an opportunity for people to really learn about issues that impact their communities – issues that are going to inevitably come up in midterm elections — and hopefully, it’ll drive action.”

Diaz added, “At the very least, to get more people connected to what’s happening locally in their communities, but also, you know, getting them to register to vote, first and foremost. And to recognize that there are networks of folks and organizations that they can lean into for support and for greater resources.”

In a video of the event shared to Twitter by The Athletic’s Shams Charania, Popovich says, “I can’t imagine a day or two or a week. I can’t put my arms around it. I mean this is the country that we live in.”

“I don’t have the answers, but it pisses me off. It hurts me. It confounds me. And I wonder where the hell do I live? I live in a country, I did not know exists. I knew there were racists. I understand that. But I had no idea it was to this level and that the injustice and the seeking of power was so rampant that we are in the position that we are in now,” he added.

Popovich is no stranger to making absurd comments. Back in June, the Spurs coach blamed 50+ year-old white men for screwing up everyone’s lives.

Popovich appeared at the Stand with Uvalde political rally organized by Voto Latino where he declared during his speech, “We’ve got to get them all out next election. And we’ve got to vote them out of there so we can save our children.”

He then stated, “‘Cause I’m sick and tired of 50 and 60 and 70-year-old white men screwing up all of our lives because they’re selfish and really care about nothing else but their position. They’ll say, ‘Oh! That’s unpatriotic.’ or ‘That’s mean.’ No, it’s freaking true.”

Toward the end of his speech, he would also say, ” “Please, take seriously the fact that you demand to stop being lied to and treated like your idiots. They are the people who are almost too smart because they think they’re tricking us. And the only way we can get that message is if we vote. So get after it. Stick together with it and save our children.”

“I’m sick and tired of 50 and 60 and 70 year old white men screwing up all or lives because they are selfish and really care about nothing else but their position,” Gregg Popovich said towards then of his speech. #StandWithUvalde pic.twitter.com/zTJ8Lq4Npb

Back in 2017, Popovich declared that “people have to be made to feel uncomfortable and especially white people because we’re comfortable,” in order to effect social change whether that’s the LGBTQ movement or women’s suffrage.

He would continue to espouse blatant racism saying, “Because you were born white you have advantages that are systemically, culturally, psychologically there. They have been built up and cemented for hundreds of years.”

What do you make of Popovich’s speech?

NEXT: Former Boston Celtics Center Enes Kanter Freedom Calls The NBA “One Of The Most Evil Radical Organization”