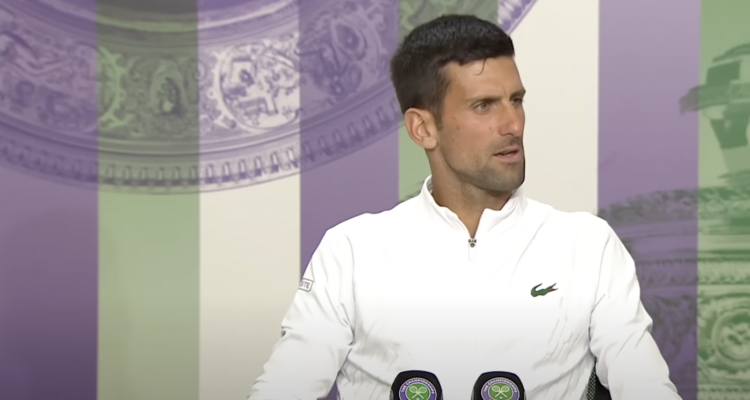 Serbian tennis champion Novak Djokovic and his stand against forced vaccinations is still continuing to draw support against the United States’ COVID policies, including several high profile Republican senators who are speaking against such policies as the one’s preventing him from competing in the US Open because he isn’t vaccinated.

On Wednesday, the US Open went ahead and actually included Djokovic’s name on the official entry list for the men’s singles division, however, they decided to add a disclaimer to it stating that should the Serbian not participate, it is due to the policies of President Joe Biden’s administration.

Djokovic is one of the few internationally recognized athletes in the world who has spoken out against vaccine mandates, thus making him a target for politicians, sports pundits, and the media because he has refused to comply.

The campaign to attack his reputation began in January when he received an exemption to the vaccine requirement for entry to compete in the Australian Open. When pro-vaccine forces saw this, they compelled the government to temporarily imprison him until he could be deported, with officials saying that the drastic reversal was done to prevent spurring any “anti-vaccine sentiment.” The government’s defense for allowing him in the country in the first place? A computer glitch.

Related: John McEnroe Blasts Politicians For Refusing To Allow Novak Djokovic To Play In The US Open Over His Vaccination Status

Months later despite being attacked by pro-vaccine propagandists in the media around the world, Djokovic would still go on to compete and become victorious at this summer’s Wimbledon championship in England.

Djokovic’s absence from the US Open, which he has won on three separate occasions in the past, will be deeply felt within the tennis community if he does indeed not participate because of the CDC’s policy. The CDC currently doesn’t allow non-citizens entry into the country without vaccination unless they fit into a vary narrow area of exemptions, none of which the healthy and athletic Djokovic falls into.

Within moments of the news breaking regarding the US Open’s disclaimer under Djokovic’s name, Republican senator from Texas, Ted Cruz, immediately pointed to Joe Biden’s strict policies regarding CVID entry restrictions.

“Let Novak Djokovic play,” said Cruz in an exclusive statement given to the Daily Mail. Cruz continued to call these entry restrictions for non-vaccinated individuals “absurd” and went as far as to say that the President was intentionally “pushing for a forever pandemic” as a sort of long-term power play.

Tennessee Senator Marsha Blackburn echoed Cruz’s remarks, saying, “It is absurd that Novak Djokovic is not allowed to enter the USA. No one should ever be punished for not being vaccinated, but the left has realized if COVID is over, they will lose control over Americans’ lives. That’s why Joe Biden and Anthony Fauci are pushing for a forever pandemic.”

Do you think Djokovic should be able to compete in the US Open despite not being vaccinated against COVID-19?