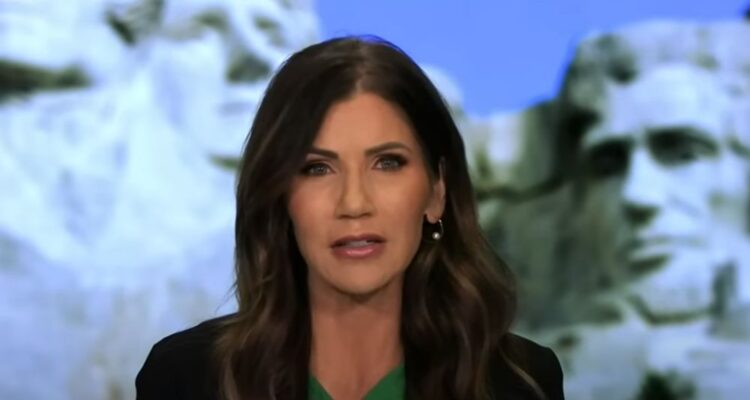 Gov. Kristi Noem (R-SD) has been an outspoken proponent of not allowing boys to compete in girls’ sports in her state. She signed a bill earlier this year banning boys from competing in girls’ sports, requiring student athletes to compete against opponents of their own biological sex. The bill was opposed by seven Democrats, and ten Republicans.

Last week, Gov. Noem joined Newsmax TV’s “The Chris Salcedo Show,” to discuss the University of Pennsylvania nominating Lia Thomas for the National Collegiate Athletic Association’s (NCAA) Woman of the Year award. Thomas was born a male, and began living as a transgender woman in 2019, during his junior year.

Thomas received a mixed reaction from his teammates, with some issuing a statement of support and 16 others sending a letter to the school and Ivy League that he shouldn’t be allowed to compete. One teammate called Thomas “mentally ill,” while another claimed he holds an unfair advantage–backing that claim up with the difference in his men’s and women’s rankings.

The NCAA’s Woman of the Year award recognizes female student-athletes who have exhausted their eligibility and distinguished themselves in their community, in athletics and in academics throughout their college careers. Thomas is one of 577 nominees selected from the approximately 223,000 female collegiate athletes nationwide.

2022 marks the 50th anniversary of Title IX, and in recognition of that the NCAA noted this was an important opportunity to honor and reflect on the impact of women on intercollegiate sports. Title IX prohibits sex-based discrimination in any school or any other education program that receives funding from the federal government. Title IX was originally used to protect women and is now being used to protect men who want to be women, from actual women.

Gov. Noem told Salcedo the issue is unfair, and what they’re embracing is extreme.

“You know, it’s such an unfair issue right now,” Noem said. “And what they’re embracing is so extreme. You know, the ‘Woman of the Year’ should be a biological woman. We fought for this years ago with Title IX. I’ve continued to defend it for many, many years now. In fact, years ago, when I was serving in Congress, I fought to protect the state of rodeo from this agenda. They started with something that they felt nobody would notice, but we fought back and got them to back off. Now, they’re going after every single competitive sport. And this is the worst example right now.”

“What they’re doing here to take away a fair competition for women is detrimental to the future of this country because erasing gender the way that they are creates an unfair environment that doesn’t allow our girls to grow up, compete, to show success and possibly pursue professional sports if they’d like to,” she proclaimed.

Do you believe men should be allowed to compete against women in sports?

NEXT: Martina Navratilova Mobbed For Denouncing University Of Pennsylvania’s Decision To Nominate Lia Thomas For NCAA’s “Woman Of The Year” Award