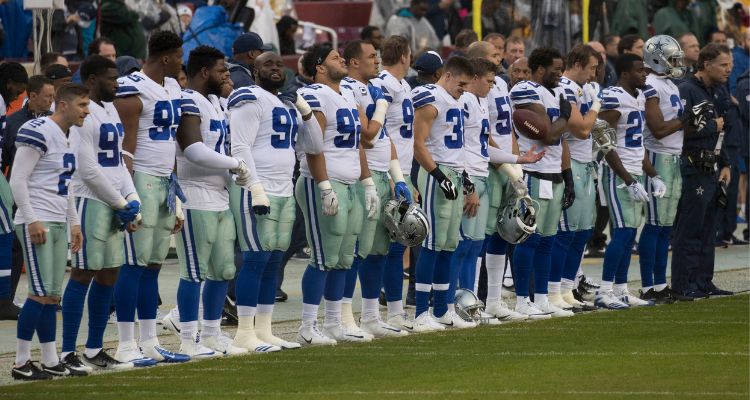 The woke mob has infiltrated every facet of American society, and the NFL is no exception.

Unfortunately, the NFL is learning once you bow to the woke masters, you can never be woke enough. The franchise owned by Jerry Jones announced they struck a deal with Black Rifle Coffee Company causing a backlash on social media.

The Dallas Cowboys are offering free tickets to a game and a one-year subscription to the veteran-owned coffee company.

The backlash on social media criticized Black Rifle Coffee Company for the timing of the deal, the names of their coffee flavors, posing in a picture with Kyle Rittenhouse, and implied they were members of the KKK.

Sports Business correspondent Bob Williams tweeted, “Talk about terrible timing. The Cowboys announce a partnership with a company called Black Rifle Coffee in the wake of the July 4 mass shooting.”

He then shared a picture of a man wearing Ku Klux Klan robes.

Even though the veterans of Black Rifle Coffee Company defended our freedoms, the woke mob wants to cancel them because they have the wrong political opinions, once took a picture with patriot Kyle Rittenhouse, and name their coffee after weapons. They believe that makes you a card-carrying member of the KKK.

The woke mob would have you believe the entire partnership should’ve been aborted because of a senseless, tragic shooting in Illinois on July 4th.

While the deal was struck well before that fateful day, there is perhaps no better symbol to celebrate America’s Independence Day than a veteran-owned company which promotes our 2nd Amendment right–and a partnership with America’s team.

It’s also fair to question if the law-abiding people at the parade in Highland Park were armed, could any of those senseless, tragic deaths have been avoided.

Bottom-line, the deal is harmless, fun, and aligns with the NFL’s partnership with the U.S. military. Besides supporting and hiring our troops, Black Rifle Coffee Company also posts plenty of good content on social media.

Do you believe the Dallas Cowboys should have canceled their deal with Black Rifle Coffee Company?