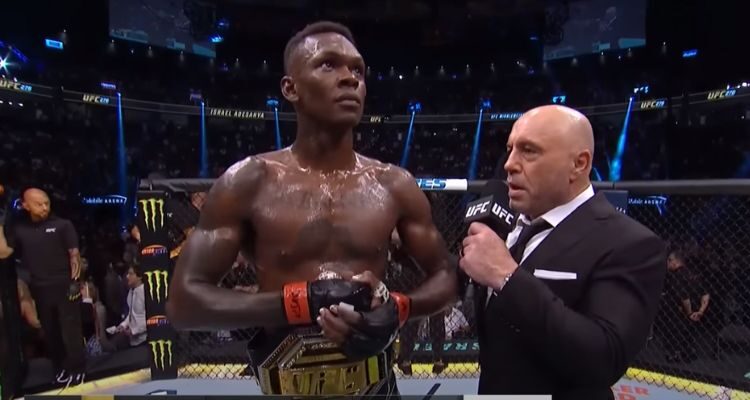 Maxwell was sentenced to 20 years in prison for her role in aiding sex trafficker and financier Jeffrey Epstein at the end of June. As noted by The Post Millennial she was “convicted in December of recruiting and trafficking four teenage girls for sexual abuse by her then-boyfriend Jeffrey Epstein.”

During the court proceedings, Epstein’s “little black book” was brought up in court when Epstein and Maxwell’s former house manager Juan Alessi testified.

Twitter user Inner City Press provided a brief transcription of the testimony back in September noting that names were kept in phone books and they were updated twice a year with old ones being thrown out.

Referencing these phone books during the lead-up to UFC 276, Adesanya called for the names of Maxwell and Epstein’s traffickers and clients to be released when he was asked what humanity’s motto should be.

He told the press, “Ghislaine Maxwell just got put away for 20 years. So she was supply kids for all these f***ing pedos, right? Where’s the list? Does that just get (he waves his hand over his head)?”

“And I’m like, so the list of politicians, and actresses, and actors, or whatever that they talked about — does that get swept under the rug? Do they not get any time for actually f***ing those kids? You know what I mean? It’s weird how that just doesn’t compute with me,” he said.

Along with calling for Maxwell and Epstein’s list to be released, Adesanya, who is a Nigerian-born New Zealander, called out President Joe Biden for his cue cards.

He said, “Man, your leader of your country having cue cards telling him how to walk onto podium, address people. It’s just a weird Sims game we’re playing.

In the post-fight press conference, Adesanya admitted he had an off night saying, “I’ve said this before in the past. On my worst day, I can kill the best man. I call that suicide. … I had an off night tonight. So Eugene told me, you know, the people who really know you, my teammates, my family, they know you had an off night, and still, I still f***ed him up.”

Adesanya is expected to fight Alex Pereira next after he defeated Sean Strickland via knockout after referee Jason Herzog stopped the fight at 2:36 seconds in the first round at UFC 276.

What do you make of Adesanya’s comments about Maxwell, Epstein, and President Joe Biden?