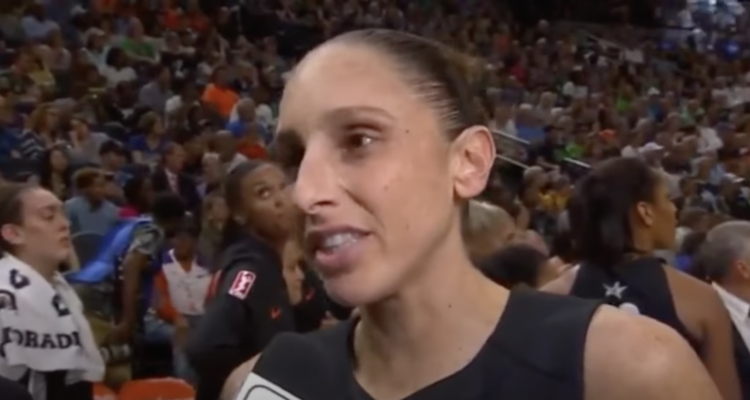 The Minnesota Lynx defeated the Phoenix Mercury at Tuesday’s game this week (118-107), but people are talking less about the game itself and more about how Phoenix guard Diana Taurasi actually kicked an opponent in the groin during the final minutes of the double-overtime.

As you can see below, Taurasi drives to the hoop, pulls up, fires off a shot, but while she’s doing that she’s also kicking Lynx player Sylvia Fowles.

Here’s another angle and in slow motion.

The situation occurred during the final moments of the close game, when Lynx player Sylvia Fowles was under the hoop as Taurasi was about to make a shot when out of nowhere, Taurasi kicked Fowles in the groin while attempting to make a failed shot at the hoop.

In the video from the game, you can see Fowles in very visible pain hugging her own stomach as Taurasi walks away. Taurasi made eye contact and communicated with a gesture towards the ref, knowing what she had done was illegal player contact which should have earned her a foul, but for some reason wasn’t whistled at.

Last stages of the games and Diana Taurasi out here kicking the great Sylvia Fowles in the groin for what reason?! pic.twitter.com/uo8VtziWuW

Fowles was subbed out for the final 33 seconds after the hit.

Lynx head coach Cheryl Reeve spoke about the situation on a recent episode of her podcast. “It was unacceptable, more than anything, it’s disappointing that Taurasi would do that,” said Reeve, “But we’ve said this: Whether you’re friends or not, when you’re on the court, Taurasi doesn’t treat you like a friend.”

Reeve is accurate in her criticism of Taurasi’s behavior since she does have a track record of injuring her opponents, such as the time she gave Washington Mystics’ player Elena Delle Donne a concussion during a game.

“There’s been multiple situations where I question, I go, ‘And you guys say you’re still friends?!” Reeve continued. “Like, you could ever do these kinds of things to a friend?”

Reeve also talked about the fact that even after Fowles was kicked, Taurasi was never whistled for the foul. Reeve blamed the officials, saying that what occurred on the court “cannot go unpunished.”

“It was so egregious,” Reeve said, “I’m going to wait for a ruling on that. It was very disappointing behavior. Not surprising, of course, but disappointing. There will be ramifications to that kick.”

Do you agree with Reeve that there must be a form of punishment for Taurasi?