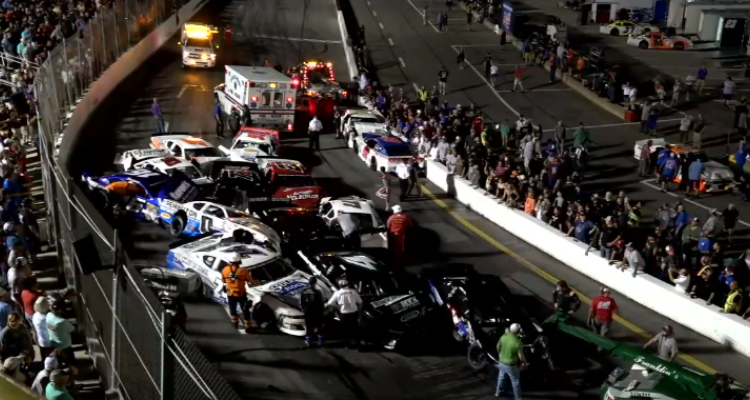 WATCH: Wild Wreck Takes Out Nearly The Entire Field In The First Leg Of The Virginia Triple Crown

A wild wreck took out nearly the entire field during the first leg of the Virginia Triple Crown, the Harley Davidson 200 at South Boston.

Only seven cars made it through the wreck that began when Mike Looney and Jonathan Shafer got together coming out of turn 4. Shafer would spin down the track while the #14 of Jared Fryar would spin the opposite direction attempting to avoid Shafer.

With Fryar’s car perpendicular across the track, the drivers behind him had nowhere to go and everyone behind them except for Mark Wertz and Kyle Dudley was collected in the wreck.

Huge wreck during the Harley Davidson 200 at South Boston pic.twitter.com/SfE4CAA9rL

Here’s another look at the massive pile-up:

While only seven cars avoided the wreck, Fryar, Bobby McCarty, Mason Diaz, and Camden Gullie were able to return.

During the red flag, Looney would tell track reporter Jaclyn Drake, “It all happened so fast. I was trying to do a little damage control. We got a good long run car. We just really stink on the restarts. I was just trying to — probably trying too hard doing a little defense right there. I got a good run on Shafer and we were both slipping and sliding coming off the turn there.”

“Turn 4 here has been my Achilles heel always. I’ve been on both ends of the crash. It’s like pouring water down a funnel at 110 miles per hour right there. Cars come together. Like I said I’d have to see what happened. I’m sure it’s probably my fault. If it is, I’m sorry. I’m really sorry for all these guys that got collected; none of their doing,” he added.

With 11 cars left on the track after 42 started the race, the aggressiveness only amped up. With 10 laps left, Mike Looney’s night would end when he slammed into the rear of Peyton Sellers after Sellers spun Carter Langley going into turn 1.

Looney had nowhere to go and slammed into Sellers’ left quarter panel. Both Langley and Sellers would be able to return and would end up finishing third and fifth respectively.

The race would eventually finish with Corey Heim taking the win after a dominating performance, but he would face a tough challenge from Jacob Borst in the final laps. In fact, the two would actually wreck as they went across the finish line.

Borst was able to get to the inside of Heim after tagging him in the rear and driving him up the track. However, Heim was able to keep his momentum and get a great run on the outside. Borst, in a move of desperation as the two raced to the finish line drove Heim into the wall, but it wouldn’t be enough.

The second leg of the Virginia Triple Crown, Hampton Heat 200, takes place on July 22nd at Langley Speedway. The Triple Crown finishes at Martinsville on September 24th for the ValleyStar Credit Union 300.