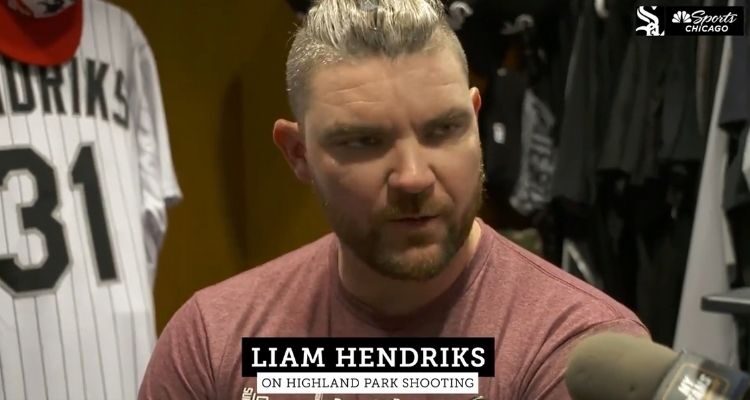 Chicago White Sox pitcher Liam Hendriks called for more gun control and claimed that “protection isn’t a good enough reason to get a gun” in the wake of the shooting at Highland Park during a July 4th parade.

The shooting claimed the lives of seven people in Highland Park, Illinois and left more than 30 injured.

It is believed to have been carried out by 22-year-old Robert “Bobby” E. Crimo III, who was arrested by police following a brief pursuit.

Hendriks reacted to the shooting before the White Sox game against the Minnesota Twins telling press, “Obviously, I read about it on the way here. It’s something that you never want to read. But, unfortunately, in this day and age is becoming all too commonplace.”

“It’s the tragedy that they go through. The entire community when people are concerned about leaving the house, concerned about doing the day-to-day things of going to work or any number of these things. We really need to reflect on what’s going on. I don’t think enough is being done,” he said.

Hendriks then stated, “And I think there’s two sides, and the two sides need to meet somewhere in the middle and figure this out because too many people are dying. And it’s no excuse to be like, ‘Oh, I’m on this side or that side.’ That’s no excuse.”

“At some point things need to get done or else,” Hendriks opined. “It’s getting to the point where civilization as you know it may be ending just due to the fact there’s two drastically different sides.”

The pitcher then compared purchasing a firearm to taking a driving test.

He said, “It’s baffling to me, obviously coming over — that’s what America is known for. Their known as the superior — there’s a lot of things that are good over here, but you look at the negatives and it’s just a complete kind of…”

“I can walk into a store as a non-American and buy a handgun in certain states. And that baffles me because I had to take a driving test when I was over here. I won’t have to take a test if I want to get a gun. That’s stupid. Whoever thought that was a great idea was an idiot,” he charged.

“But other than that there’s a lot that goes on,” Hendriks relayed. “Obviously, we as an Australian, we dealt with it as a country back in the day when we had a mass shooting and when that mass shooting happened the government came in and was like, ‘Yeah, we can’t do this. We are going to do a buy back program. And so we are going to buy back your guns for a fair price and do all this.’ And all of a sudden suicide rates dropped drastically. Gun-related homicides dropped infinitely. And it’s something that has pretty much kept on.”

He began to wrap up the interview saying, “Hopefully, the world can change and soon because I think it’s necessary.”

Then while discussing a shirt that he wore he concluded saying, “I stand for what I believe in. I don’t necessarily care whether people like my opinion or like me for that. I like me and that’s all I really care about. You got to take care of what you believe and that’s something that the more passionate you are about something that hopefully the more it causes change.”

John Matrixx of Black and White Sports reacted to Hendriks’ comments saying, “The Second Amendment is under attack, yet again. And when it comes to a foreigner talking about our Constitution, I believe that they should be quiet on this because this is our Constitution. The Constitution was written for us, for American citizens.”

“And when you have foreigners coming over here and working in this country, they should actually respect our Constitution.”

Matrixx further called out Hendriks for his lack of statement regarding multiple shootings that took place in Chicago over the July 4th weekend.

Specifically referring to Hendrik’s comments about protection not being a good enough reason to own a firearm, Matrixx questioned, “Then what is a good reason to him to actually own a gun? I have a gun because I just want protection and because it is my Constitutional right.”

“This is pretty pathetic. What he was very, very disrespectful to our Constitutional rights. It just is. We have the right to bear arms, here in this country. If you don’t agree with our Constitution, guess what, you can go back to Australia. Go. Goodbye,” he concluded.

What do you make of Hendriks’ thoughts on gun control?

NEXT: Cincinnati Bengals Quarterback Joe Burrow: “If You’re Not Gonna Outlaw Everything, You Gotta At Least Make It Harder To Get Those Crazy Guns”