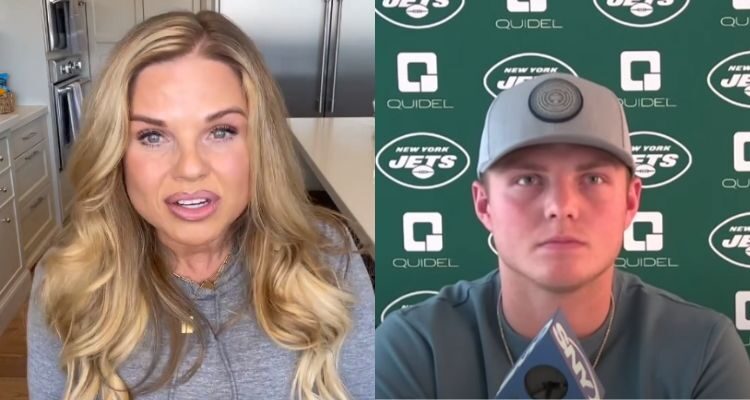 Lisa Wilson, mother of New York Jets quarterback Zach Wilson, took to social media this week to demand people stop calling her friends amid allegations that her son had sex with her best friend.

The drama unfolded when the 22-year-old’s ex-girlfriend Abbey Gile revealed that they broke up earlier this year because he cheated on her with his mom’s best friend. Abbey was apparently still a little bitter about the situation.

When a fan called Gile a homie hopper on Instagram, she provided more details on the breakup in a now deleted post, claiming the real home hopper is Wilson for sleeping with his mom’s best friend.

“He was sleeping with his moms best friend…that’s the real homie hopper.”

Instead of criticism, Wilson received mostly praise on social media for the accusation, with many fans sharing cougar memes. Which was probably not the response Wilson expected.

In a plot twist, his ex-girlfriend is now dating Washington Commanders wide receiver, Dax Milne, who is Wilson’s former best friend and teammate at Brigham Young University (BYU). The two former friends also stopped following each other on social media but will remain Eskimo brothers for life.

Wilson had remained silent until Wednesday, when he seemed to acknowledge the accusation for the first time in a light-hearted manner, posting on Instagram, “Took the boys to Gozzer Ranch Golf & Lake Club in Idaho before camp! Poor cell service…what I miss?”

On her Instagram Stories on Monday, Lisa had a message for those people who are invading her privacy.

“My friends are freaking amazing. By the way, stop calling my friends, okay. You are annoying them.” Lisa said in a video.

According to the New York Post, Lisa also shared a message questioning the media attention her family has received since Wilson was drafted as the second overall pick by the Jets last season.

“So I’m curious why the media is obsessed with your family?” the message read. “Is it bc he plays for the Jets of bc you live in Utah? There is literally 0 media coverage of the other draft players and their families and yet the whole media be watching everything y’all post or comment.”

Lisa then responded, “Hahaha who the hell knows. That is a very good question.”

For her part, Lisa appears to be very active on social media and loves sharing details of her personal life.

She’s very aware of the attention she’s receiving. She’s even made a reference recently to having “hot friends,” which does not appear to be inaccurate.

For internet sleuths, the journey to find which one of Lisa’s hot friends allegedly banged her son will continue.

Wilson is a grown man who can do what he wants with his life, but the situation is messy, and nobody comes out of it a winner. The Jets need a quarterback who doesn’t bring distractions to the field, and a mother is left to handle a rather awkward situation between her son and friend.