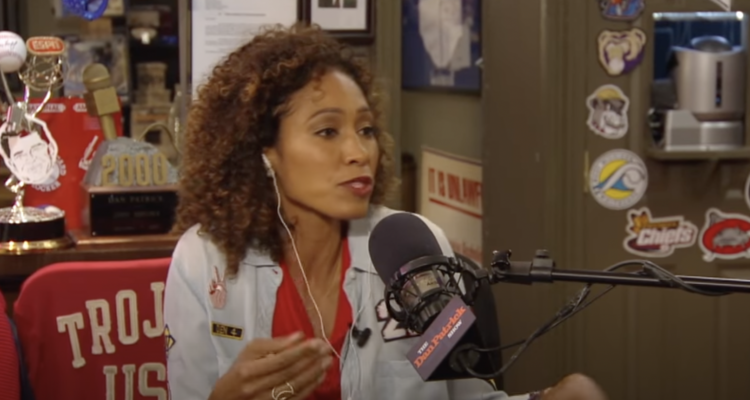 After Update To CDC Guidelines, ESPN’s Sage Steele Demands Apology After She Was Allegedly Suppressed By The Disney-Owned Sports Network

Sage Steele, an ESPN sportscaster who found herself in the eye of a hurricane of criticism when she spoke out against employers who were forcing their employees to take the experimental Covid-19 vaccine, seems to have been vindicated after recent CDC updates changed their Covid guidance.

The situation began months back when Steele was punished by ESPN parent company Disney for remarks she made on a podcast that were critical of the corporation’s vaccine mandate, which forced all employees to either take the vaccine or be fired as a result.

Upon hearing of the changing CDC guidelines which stated that employers should no longer have different standards for vaccinated and unvaccinated employees, Steele over on her official Twitter account added to comments made Dr. Nicole Saphire, an outspoken critic of the government lockdowns and punitive Covid policies the nation faced the past two years.

“Now that the CDC no longer differentiates between Covid vaccinated/unvaccinated individuals,” Saphire tweeted, “every employee fired for being unvaccinated should be given their job back with a formal apology and backpay.”

Steele retweeted Saphire’s remarks, adding “…and all those who were canceled or punished for not wanting to be forced to take this ‘vaccine’… and all of us parents who were shamed for not caving and giving our kids the shot… and, and, and…”

Steele’s attitude towards this situation seems justified after the public shaming of the sports personality, who called the vaccine mandates “sick” and “scary” last year.

As said to podcaster and former NFL quarterback Jay Cutler during her appearance on his podcast which started all this for Steele, “I respect everyone’s decision, I really do, but to mandate it is, sick, and it’s scary to me in many ways.”

“But I have a job, a job that I love, and frankly, a job that I need, but again, I love it. I’m not surprised it got to this point, especially with Disney, a global company… but it was actually emotional.”

According to a lawsuit filed by Steele in April, she claims she was ostracized in her workplace following her remarks and was intentionally taken off air without explanation.

Steele’s suit specifically claims that ESPN violated her rights to free speech, and is also demanding that the company issue her a formal apology. As of June, ESPN filed a motion to dismiss Steele’s suit against them.

The ESPN motion states, “Removing Steele from broadcasts, allowing her co-workers to forgo appearing with her, and allegedly conditioning her return to those broadcasts on her issuing an apology are casting decisions that are considered conduct furthering  ESPN’s protected expression.”

Do you think Steele’s lawsuit and opinions regarding the employer vaccine mandates is justified given how the CDC guidelines eventually changed?

NEXT: Tennis Fans Calls For Novak Djokovic To Be Allowed To Play In The US Open After CDC Updates Covid-19 Guidance