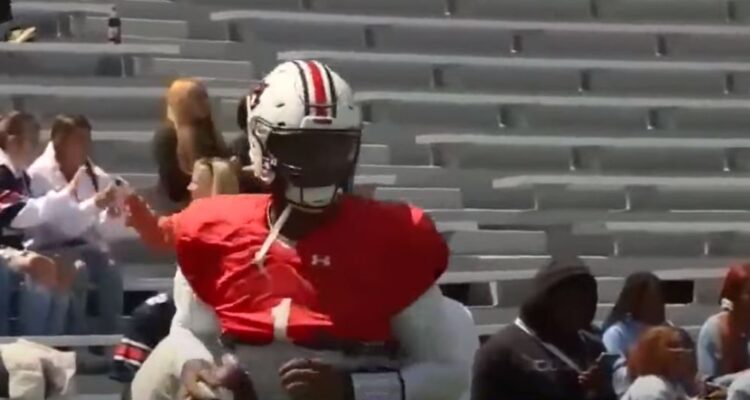 On August 4, the day Auburn football players were set to report to camp, quarterback TJ Finley found himself in custody at Lee County Detention Facility.

Finley turned himself in on Thursday morning. He was charged with Attempt to Elude after an incident with the Auburn Police Department.

According to a report from WRBL, police attempted to stop Finley on two separate occasions after he committed a traffic violation. The original violation was failure to wear a helmet while riding a motorcycle. Police say that Finley fled and committed a number of additional traffic violations. The officers said that they stopped pursuit of Finley as a matter of safety, but obtained an arrest warrant.

Finley turned himself in later on Thursday, and made the $3000 bond. By the end of the day on Thursday, he was at the Auburn athletic complex.

Finley’s lawyer, Davis Whittelsley, made a statement following the arrest.

“The charges pending against my client, T.J. Finley, are the result of traffic violations and a misunderstanding,” Whittelsley said. “The charges are in the process of being handled in municipal court within the City of Auburn as all traffic citations are. As soon as T.J. learned of the charges, he turned himself in and has been released on a bond he signed for himself. His first day of football camp with Auburn University has been a success.”

Finley transferred to Auburn from LSU in the spring of 2021 and is entering his junior season. Last year, he threw for 827 yards and six touchdowns over nine games. He is expected to compete for the starting job with sophomore Zach Calzada. Finley practiced in full on Friday, so this situation does not seem to have affected his chances to win that job.

However, it remains to be seen how it will impact Finley’s NIL deal with Amazon. Earlier this year, Finley inked a deal to sell custom apparel through the Amazon store. It was the first NIL deal of its kind.

He announced it on Instagram at the end of July writing, “Excited to partner with Amazon Fashion to promote Merch on Demand. Shop this hoodie and my upcoming custom designs via the link in my bio. Get fast free shipping on this hoodie when you start your 6-month trial of Prime Student.”

The charge is just a misdemeanor, so it’s unlikely to derail Finley’s season too much. After all, players at the college and professional level have had far worse run-ins with the law, and gone on to have successful seasons.

What do you think about Finley’s run-in with the law?