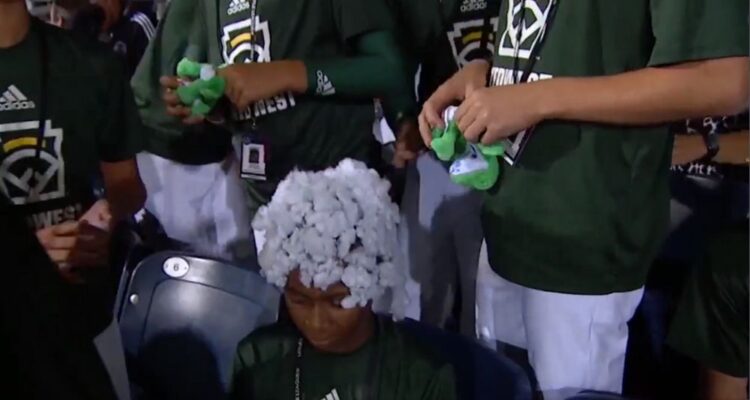 CBS Sports anchor for the Washington D.C. affiliate WUSA9, Darren M. Haynes, blasted a number of Little League players and accused them of racism after video showed teammates putting what many assumed was cotton in one players’ hair.

During the MLB Little League Classic between the Baltimore Orioles and the Boston Red Sox players on the Midwest Region team from Davenport, Iowa and the Davenport southeast Little League were enjoying the game by giving themselves a new hairdo.

The kids were showcased during the game with ESPN’s Karl Ravech saying, “That’s just Little Leaguers being Little Leaguers right there.” He then went on to promote the next Sunday Night Baseball game between the Atlanta Braves and St. Louis Cardinals.

He even speculates that it’s the stuffing out of a stuffed animal as well.

Little League officials tell me there’s no “ill-intent” behind this incident that aired Sunday showing players on the Midwest team from Iowa putting what appears to be cotton in their Black teammate’s hair. pic.twitter.com/Wmjxu4rbNL pic.twitter.com/vaAtSN4JbM

WUSA9 and Haynes ran a whole segment on the short clip accusing the players of racism.

He stated, “The Little League World Series assured there was no ill-intent behind the actions. And to be honest, I believe the kids were not trying to be racist. They just didn’t know what they were doing was racist.”

“But let this serve as a reminder why education is the best tool for tackling racism and discrimination so I don’t have to keep talking about senseless acts like this anymore on TV,” he concluded.

Little League International provided Good Morning Iowa anchor Chenue Her a statement that reads, “During the broadcast of the MLB Little League Classic, a Midwest player was shown with filling from a stuffed animal given away at the game on his head. After speaking with the team, as well as reviewing photos, multiple players were taking part in this while enjoying the game.”

“As only one player appeared on the broadcast, Little League International understands that the actions shown could be perceived as racially insensitive. We have spokes with the player’s mother and the coaches, who have assured us that there was no ill-intent behind the action shown during the broadcast,” it concluded.

RELATED: Dwyane Wade Claims Hatred Of Miami Heat’s Big Three Is Because They Were “Black Men”

In fact, there are photos circulating on social media showing other players with the stuffing on their hair.

Twitter user K.E. Ganshert shared one such photo and wrote, “Many of the teammates were participating, Black and white. They were imitating the stud pitcher from Hawaii who has an awesome white-dyed Mohawk.”

She added, “There’s a video where the player making headlines is flexing and smiling with the words ‘the new Jarron Lancaster.'”

She would later share the video as well writing, “Here’s the context. Lancaster from Hawaii is a straight stud baseball players. All the kids are getting his autograph.”

Here’s the context. Lancaster from Hawaii is a straight stud baseball player. All the kids are getting his autograph. pic.twitter.com/pEuu1R8h37

You can see that Lancaster does indeed have a dyed blonde mohawk as he struck out 12 of the 15 batters he faced in a game against Southern California throwing fast balls between 75-78 miles per hour and a slider around 70 miles per hour.

Clearly, Haynes should have taken his own advice and got educated on what was really happening at the baseball game instead of running to his camera and crying racism.

Not only should Haynes have taken his own advice, but WUSA9 and CBS should have too. They allowed Haynes to do an entire segment without understanding what was going on or even attempting to do any investigation into why the players were putting stuffing on their heads.

Instead, they had the opportunity to sell a narrative on racism that is completely and utterly false. And clearly the narrative is and was more important than discovering the truth.

**Editor’s Note: The headline of the article was updated.**