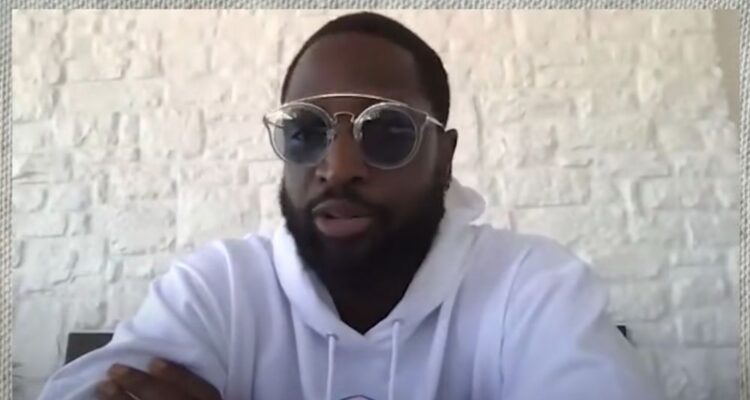 Dwayne Wade claims that criticism of the Miami Heat’s Big Three is due to the fact that they are black men.

If you recall the Miami Heat’s Big Three consisted of Wade, LeBron James, Chris Bosh. In 2010 both James and Bosh joined the Heat through free agency and began the Big Three era of the franchise.

The trio lead the team to the NBA Finals in their first season, but eventually lost to the Dallas Mavericks. However, in their second season together they would win the NBA Finals with James being named the MVP in 2012.

They would also win the the NBA Championship for a second year in a row in 2013 with James again named the MVP. In their fourth and final season together, the heat would reach the NBA Finals again, but would eventually fall to the San Antonio Spurs 4-1.

The Big Three would break up following the loss to the Spurs with James announcing he would return to the Cleveland Cavaliers.

Wade appeared on The Old Man & The Three podcast hosted by JJ Reddick and Tommy Alter back in 2020, but the podcast recently shared a clip of his comments to their Twitter bringing them back to attention.

Reddick asks Wade, “Did you guys, when you signed with Miami, did you guys expect the level of backlash and hate that came your way especially initially? Did you expect that? Did you feel that it was going to be celebrated more than it was.”

Wade responded to the first two questions saying bluntly, “No.” In response to the final question he said, “Yes, we thought it was going to be celebrated. You think about it at that time, LeBron is beloved. I’m beloved. Chris Bosh — I mean no one knows Chris Bosh like that, but he wasn’t hated. At the time no one knew Chris in Toronto like that, but he wasn’t hated. He was a respected All-Star in our game.”

Wade continued, “No way did we think that making the decision that we made to play together was going to change course the way it did. It was very surprising early on. It took us awhile to adjust to the hate. And I think we adjusted to it with the only way we know how — was to get into the hate back.”

“And it wasn’t fun,” he elaborated. “That first year was not fun even though we went to the finals, and of course we lost, but it was just — it was a bad year of basketball to be…”

“This is supposed to be the most joyous time,” he detailed. “You’re playing with some of the best players in the world, one of your best friends, and in Miami, the city’s on fire, but we’re just having a bad time just trying to play basketball without joy and be driven by hate.”

“We thought that was the way. We was like, ‘You know what we gonna show these mothers,’ and we didn’t. Dallas showed us at the end and it humbled us,” he recalled. “We actually needed to be humbled even though I’m mad because that was my second Finals MVP and I’m mad that I don’t got that on my record. It wouldn’t have changed anything but still I’m mad.”

Reddick would then ask Wade, “I want to go back to the decision not being celebrated. Why do you think the reaction to you guys deciding to join up in Miami was so different — we’ll use another example, let’s use Danny Ainge trading for Ray Allen and Kevin Garnett and forming that Big Three in Boston which by the way was only like three season prior to you guys making that decision to join up. Why do you think the reaction was so different? Do you think it was because it was LeBron and he was sort of the best player in the game and he was supposed to do what Jordan did and not team up with other superstars to win?”

“I think, at the same time as well, they wasn’t used to players having control,” he asserted. “I mean organizations made trades. That’s what happened. Free agency before that was not really that sexy like that.”

“And even though it was some guy[s] like Orlando Magic who had an opportunity to do some sexy stuff with Tim Duncan possibly and Grant Hill and T-Mac like that would have been sexy. But that didn’t happen,” he continued.

“And it just wasn’t something that was really the sexy thing to do,” Wade reiterated. “And at that moment when we made a decision as players and kind of put the control in the player’s hand and change the dynamics of what people were used to you always going to get hate.”

He then provided an example, “It’s like Allen Iverson came in with braids and tattoos and sleeves and everybody’s like this is not how the best player in the game looks. They look like Michael Jordan. They don’t have tattoos. They don’t and that wasn’t Allen Iverson.”

“So you get hate when you’re the first ones to do it in the way we do it. So we understand it. Eventually we understood it because we kind of opened up this path for players to do it for a period of time and it became the wave. And I’m glad we did. I’m glad we took the hate,” he said.

Wade went on to describe the hate he took, “But I seen some real hatred out there, JJ. I’m talking about — I seen some ugliness from fans that I didn’t know existed, and I come from the inner city of Chicago. And I didn’t know some of this ugliness existed in the world.”

When questioned by Reddick where this was taking place, Wade confirmed, “This is in the arenas. This is in our everyday life of us traveling and going places. At that time we had to have so much security around us because the hate was real. And people would say some of the — the things that you would just look at them and say like, ‘You don’t even know me,’ like, ‘How can you speak of me in this way?’

But the hatred that I heard in the locker room. I’ve never heard hate before. Like you can hear someone say something, but if you ever heard the sound of hate, it is the most uncomfortable thing to experience.

“I said I would never forget this moment a day in my life about how someone can really hate you for making a basketball decision that you felt was best for yourself and your family. It’s crazy to me,” Wade said.

Reddick then posits that some of the hate that Wade was receiving is because “a group of sports fans that are and will always be uncomfortable with powerful black me making decisions for themselves, taking empowerment, and taking control of their careers.”

But it wasn’t done in the way that LeBron did it and the way that we did it. It was done from organizations. The organizations made sure that Larry Byrd had McHale, Robert Parish, Dennis Johnson like all of these Hall of Famers. It was different.

And I agree with you and I didn’t say that, but I’m glad you said that. But we felt that way. We knew that some of the hate was because of our skin color because of being black men and decising to control the fate of our careers because organizations will do it quickly. They will trade a Dwyane Wade in a heartbeat if you’re not accomplishing what they want you to accomplish.

“So when we had the power when we had the moment, we took it. But some of the hate came because we were three black guys who decided — and we changed the way that the NBA probably would ever be because of that decision. So I agree with you, man, 100%,” Wade concluded.

Given Wade’s full tale it seems more than likely much of the hate came from Cleveland fans who felt betrayed by James for leaving the team and heading to Miami to give himself a better chance at winning a championship rather than staying loyal to Cleveland.

It seems a little farfetched to claim that the players were receiving hate because they were black especially given his discussion of the atmosphere in Miami being opposite of what he described it in Cleveland.