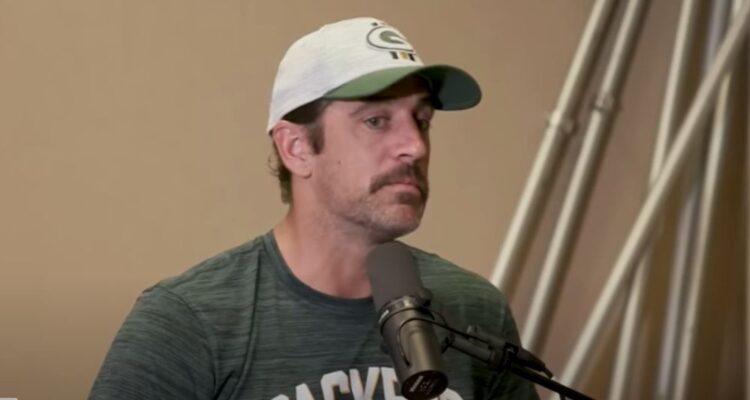 Green Bay Packers quarterback Aaron Rodgers shut down a joke regarding his vaccination status and how many grandmothers he killed.

Rodgers appeared on Pardon My Take, where his vaccination status was brought up.

Rodgers was asked by host PFT Commenter played by Eric Sollengerger, “How would you describe yourself?” He replies, “I think in general I’d like to present myself how I see myself. So unapologetically authentic. You like me or don’t like me that’s not my concern at this point.”

Rodgers continued, “My concern is speaking the truth and people will say, ‘Ooooh immunization, vaccination.”

Rodgers then shuts it down saying, “I know you guys are f***ing around, but I don’t find that part funny. I really don’t.”

After Rodgers shuts it down, Katz says, “One of my favorite things I was able to do off of that whole immunization thing is tweet that you should be in jail. And then I would have people who get the joke and then there would be like a ton of people would be like, ‘Oh you think Covid is so real he should be in jail.’ My mentions would just be a mess.”

Rodgers made headlines when he told the media in August last year that he was “immunized” when he was asked about whether or not he was vaccinated and what his opinion on the Covid-19 vaccine was.

He would later test positive for Covid-19 and had to miss the Packers game against the Kansas City Chiefs in November.

He appeared on the Pat McAfee Show where he explained his original comments, “I realize I’m in the crosshairs of the woke mob right now. So before my final nail gets put in my cancel culture casket I think I’d like to set the record straight on so many of the blatant lies that are out there about myself right now.”

“First of all, I didn’t lie in the initial press conference,” he stated. “During that time, it was a witch hunt that was going on across the league where everybody in the media was so concerned about who was vaccinated, and who wasn’t, and what that meant, and who was being selfish, and who would talk about, and what it meant if they said it’s a personal decision they shouldn’t have to disclose their own medical information and whatnot.”

He continued, “And at the time, my plan was to say that I’ve been immunized. It wasn’t some sort of ruse or lie; it was the truth.”

“Had there been a follow-up to my statement that I’ve been immunized, I would have responded with this. I would have said, ‘Look, I’m not some sort of anti-vaxx flat-earther. I’m somebody who’s a critical thinker. You guys know me. I march to the beat of my own drum. I believe strongly in bodily autonomy and the ability to make choices for your body, not to have to acquiesce to some woke culture or crazed group of individuals who say you have to do something.”

“Health is not a one size fits all for everybody,” Rodgers asserted. “And for me, it involved a lot of study in the offseason. Much like the study I put into hosts in Jeopardy or the weekly study I put in the plan of the game. I put a lot of time and energy and research and met with a lot of different people in the medical field to get the most information about the vaccines before making a decision.”

In actuality it was pretty easy in the beginning to eliminate two of them,” he elaborated. “And it didn’t involve going into the questionable history of some of their criminal activities, some fraud cases, or any of that stuff. It was simply the fact that I have an allergy to an ingredient that in the mRNA vaccines.”

“On the CDC’s own website it says, ‘Should you have an allergy to any of the ingredients you should not get one of the mRNA vaccines. So those two are out already. So my only option was  the Johnson & Johnson.”

At this time in the early spring, I had heard of multiple who had had adverse events around getting the J&J,” he said. “Nothing that was — no deaths or anything but just some really difficult times and physical abnormalities around the J&J shot. And then in mid-April the J&J shot got pulled for clotting issues if you remember that, right? So the J&J shot was not even an option at that point.”

He then relayed, “So then my options became okay what can I do to protect myself and my teammates if there’s not one of the big three options for me and my own body. So I looked into and talked to a lot of medical individuals and professionals and found there was an immunization protocol that I could go to to best protect myself and my teammates.”

“It was a long term protocol that involved, you know, multiple months and I’m very proud of the research that went into that and individuals that I met with and we thought it was best for me,” he Rodgers noted.

He then detailed, “It was not something that the league didn’t know about. The league was fully aware of it upon my return to the Packers. It was at that point to petition them to accept my immunization status under their vaccination protocol.”

“At the time they had only had the big three was what they’re gonna do and if you weren’t in the vaccinated category you were in a different category which involved some draconian measures and protocols you would have to adhere to. Which in my opinion were not based on science. Were more based on a shame-based environment to try and get as many guys to get vaccinated as possible so the league looks better to the rest of the world. That was the focus of these protocols,” he explained.

What do you make of Rodgers shutting down the Pardon My Take hosts?