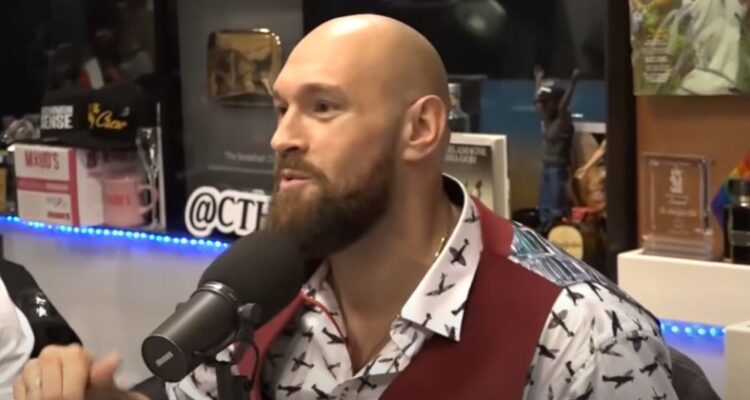 Tyson Fury aka The Gypsy King, who recently announced his retirement from boxing earlier this month and vacated the Ring heavyweight title, blasted mass immigration in a now viral video.

In the video, Fury appears to be doing some cardio training and says, “Let’s face it, we are letting thousands and thousands of immigrants in daily.”

This clip of heavyweight boxing champ Tyson Fury speaking out against migrants in the UK is making the rounds on far right Telegram channels. pic.twitter.com/8VjKc4Yba9

RELATED: Tyson Fury Demands Harsher Punishments For Knife Crime In UK After Family Member Is Stabbed To Death: “This Needs To Stop”

Fury continued, “It’s all in the name. Great Britain. It’s not so great is it when we are letting our fellow brothers and sisters die in the streets who have been born and bred here.”

“And then we let 50,000 immigrants in from wherever they’re from, crying poverty,” he said. “And then they’re going to blow us.”

He then stated, “Earlier this week we hit a new one-day record for boat migrant arrivals. Nearly, 1300 of them, mostly young men, in a single day. The vast majority from countries not at war. 4 out of 10 of them are from Albania.”

Watson added, “They’re taking the piss. They’re turning up on boats claiming to be refugees. They’re making TikTok videos on their 1,000 pound smart phones boasting about visits to restaurants, hotels, and tourist sites in London as Boris Johnson tells Brits to make sacrifices in the form of paying soaring energy bills with half the country set to enter fuel poverty this year.”

“Not only has his government sent another 54 million pounds to Ukraine, they’re paying 5 million pounds of taxpayer money to accommodate illegal boat migrants in three and four star hotels. But they also get free food and free cash handouts,” he said.

“And some of them don’t even appreciate that, staging rooftop demonstrations demanding they’ll be sent to London,” he asserted.

He then echoed Fury’s commentary about the homeless crisis in the United Kingdom, “Meanwhile, thanks to the cost of living crisis the number of homeless people is set to increase by a third by 2024.”

“Why is our government paying millions to house migrants with iPhones who jump on dinghies from France over 22,000 of whom have arrived this year alone? Yet there’s no money to house a far lower number of our own people around 2,500 who sleep rough on the streets every night. It’s a continuing outrage and Tyson Fury is right to call it out,” he concluded.

What do you make of Fury’s comments about mass immigration?

NEXT: Tyson Fury Calls Out Derek Chisora: “You’re Running From The Trilogy”