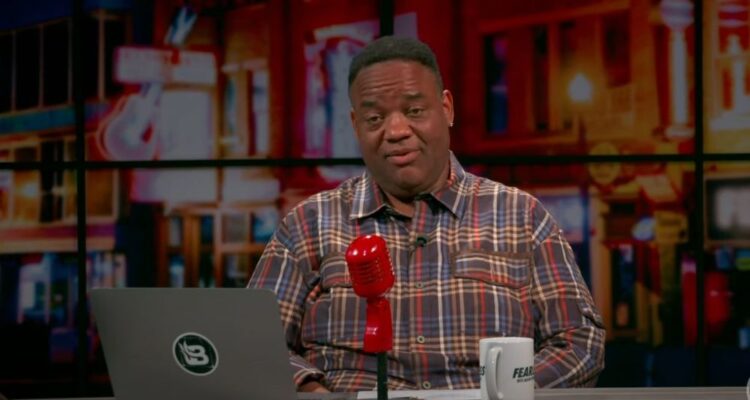 Jason Whitlock: “In This Current Culture The Worst Thing You Can Be Is A Heterosexual Christian Male”

Former ESPN columnist and the current host of “Fearless” Jason Whitlock recently explained why the worst thing you can be in the current culture is a “heterosexual Christian male.”

In Ep 263 of “Fearless with Jason Whitlock” titled How Diversity, Inclusion & Equity Are Killing America, Whitlock declares, “In this current culture the worst thing you can be is a heterosexual Christian male in the current culture they’re constructing.”

He then asks, “You going to leave that for your kids?”

From there Whitlock says, “And I’m talking to those — you ain’t even got to be a believer, just a man. That the culture is going to demand that they hop on board with the LGBTQ silent P transphobic lifestyle if they want to get ahead.”

In another portion of the podcast Whitlock also declared, “There’s no one I’m afraid to listen to. No one. Check my record. Listen to the things I talk about and discuss along my journey. I will listen to anyone because I’m on a search for truth and the truth doesn’t scare me regardless of who speaks it. And I’m grounded in a Biblical truth, again, that trumps all.”

“Tell the people what the actual problem is. Don’t dance. Don’t run from it. Don’t preach some safe message while our kids are being targeted and groomed for a lifestyle that will destroy them,” he continued.

Whitlock then advised, “You can get up there on Sunday and preach that little happy talk and make all them women in your church happy and feel good about themselves or you can stand in the pocket and tell them, ‘Hey, we need all believers to stand up and support the Gospel and get behind and demand the men in your church and the men in your life stand up and fulfill their responsibility to God and these children that we’re leaving to be groomed and violated and to grow up in a country that will destroy them, and remove their freedoms, and will eventually come after the 12 disciples the same way they’re coming after the Founding Fathers.'”

“‘Will label your kids a racist, a homophobe, or any name under the book if they stand on Biblical truth,'” he concluded. “Cowards.”

You can watch the entire episode below.

What do you make of Whitlock’s commentary on our current culture and his advice on how to change it?