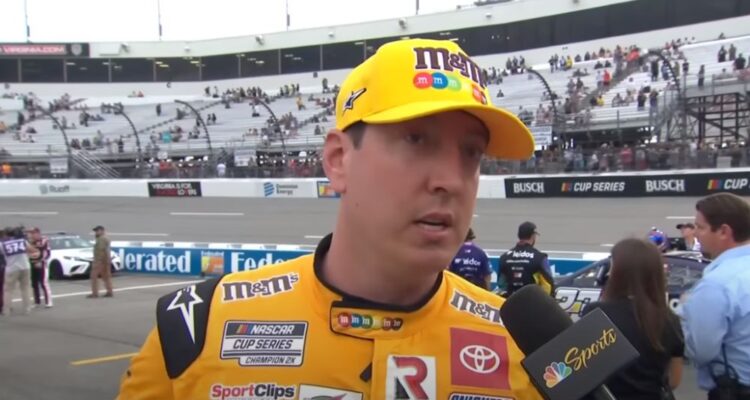 Kyle Busch is the latest driver to express frustration at competitor Ross Chastain after Chastain spun him out during the Federated Auto Parts 400 at Richmond Raceway.

In a post-race interview, Busch turned Chastain’s last name into a verb when he said, “We were looking okay and in a good spot just coming up through there, working our way methodically through the field with our M&Ms Toyota Camry and we got Chastained this week. We were his victim this week.”

Busch went on to say, “That didn’t hurt us too bad. We restarted back in a decent spot. But then the next spin, I think was Christopher, that allowed the guys that were around us that we were kind of racing some of them, some of our team guys to come get tires, and then they had 10 fresher laps on tires than us the whole rest of the day.”

“That kind of hurt us. If we would have been on that strategy, we would have run out of tires, but we also probably would have been in the top 5. Just wrong side of the strategy there at the end. Nothing to do really to flip that. Good fight all day long. A top 10 is about what we had anyways,” Busch said.

Busch reiterated that he was “Chastained” on Twitter writing, “We were able to drive r Toyota Racing Camry to a P9 finish even though I got Chastained.”

Chastain spun out Busch following a restart. Ty Dillon was down on the inside of the track with Busch on the outside and Chastain in the middle. Chastain drifted up the track seemingly trying to avoid Dillon. He would make contact with Busch’s left rear quarter panel and sending him spinning across the track.

The wreck would collect Erik Jones, who slammed into the rear of Chastain with nowhere to go.

Jones ended up finishing 35th after the wreck.

He wrote on Twitter, “Not our day in Richmond. Just in the wrong spot at the wrong time. Gotta keep moving forward.”

Busch is the latest in a growing list of enemies that Chastain is making on the race track. Probably his biggest rival is Denny Hamlin who has threatened payback on Chastain multiple times even promising to fence him.

Hamlin told FOX Sports’ NASCAR reporter Bob Pockrass following the race at World Wide Technology Raceway in St. Louis, “You’ve just got to fence these guys hard just to kind of get their attention. It’s going to have to be meaningful, on a meaningful day.”

Hamlin previously told Pockrass, “This sport is self-policing. Usually when you least expect it and when it means the most is when it comes back around.”

Denny Hamlin said when he pays back Ross Chastain, it will be meaningful and when he least expects it, that you have to “fence these guys hard” to get their attention.

More of what Hamlin said about Chastain after Gateway: pic.twitter.com/B0SCkCct6r

Hamlin fulfilled that promise at Pocono in the closing laps of the race. Chastain drove high in turn 1 and Hamlin chased him up the track. He then used his door to send Chastain into the wall.

After hitting the wall, Chastain came down across the track making contact with Kevin Harvick and then spinning into the inside wall making hard contact.

Despite seemingly getting revenge on Chastain, Hamlin wasn’t satisfied. After crossing the finish line first and capturing the checkered flag, Hamlin was asked NBC Sports reporter Marty Snider if it was over between him and Chastain.

Hamlin replied, “We are just going to keep racing hard until we get the respect back from these guys. It’s not just that. We’ve been wrecked four times, twice while leading in the last 10 months. And I’m at the end of it.”

After exiting the infield care center, Dillon had choice words about Chastain saying, “Unfortunate our weight got our car better right there. Looked like were a casualty of Ross Chastain once again.

While watching the footage of his car impact the wall he commented, “Ooh. That was a pretty good lick there.”

Following Chastain taking out Busch in Richmond, Martin Truex Jr. also expressed his frustration with Chastain as he radioed to his crew, “F***ing No. 1 car, man.”

Back at Michigan, Larson’s spotter suggested he work with Chastain. Larson replied, “Ha. Ross doesn’t work together with anybody. Funny.”

YouTuber JayTeeKay also put together a video of all the drivers Chastain had pissed off through July, which also includes Ryan Blaney and Chase Elliott.

While Chastain might not be making friends on the track, he currently sits fifth in points behind Elliott, Blaney, Larson, and Truex Jr. However, Blaney and Truex Jr. might actually get knocked out of the playoffs because they haven’t won a race yet.

He might be fifth in total points for the regular season, but he’s accumulated the second most playoff points so far with only Watkins Glen and Daytona left in the regular season. He’s got wins at Circuit of the Americas and Talladega Superspeedway with stage victories at Las Vegas Motor, Darlington, Charlotte, Pocono, and Richmond.