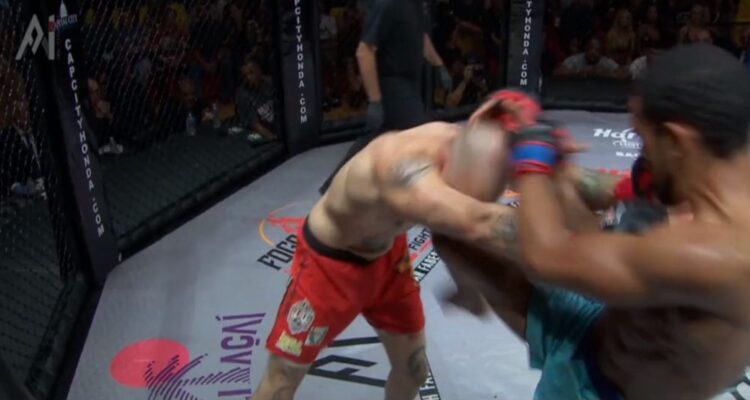 If you’ve ever watched a cage fight and thought “I could do that,” you may want to think again.

MMA Fighter Blake Perry got his face rearranged in his bout with Marcel McCain at Urijah Faber’s A1 Combat event in Stockton, CA this past Sunday. At the end of the first round, McCain clinched with Perry and landed a powerful knee square on his nose.

Remarkably, Perry fought through and made it to the end of the first round. It wasn’t until Perry got off of his stool for the second round that the doctor stepped in and called off the fight.

The welterweight bout was Perry’s second as a professional, and was actually extremely competitive. Perry spent most of the round pressuring McCain and landed a number of clean shots. <

In fact, Perry was not the only one to walk out of the cage with an injury. According to A1 Combat’s Instagram page, McCain suffered a fractured rib and a punctured lung.

After the fight, Perry had his nose put back into place. Watch below if you dare:

Here is a video of Blake Perry getting his nose put back into place after horrifically breaking it https://t.co/IKHvbnWhAu pic.twitter.com/X1CgllsJn7

The loss dropped Perry to 1-1 as a pro, but he seems to be in good spirits. Perry wrote in an Instagram post that he is “healing up quick” and joked that he already had a fight booked for the following weekend.

He wrote, “Unfortunately the doctor would not let me go out for the second round of my fight last night! All respect to my opponent Marcel on his hard fought victory. Even though the fight was only 1 round we still brought home the fight of the night bonus.”

He concluded, “Thank you to everyone who has been checking in on me. I am healing up quick and already have a fight booked for this coming weekend……jk.”

It will likely take some time, and perhaps surgery, for Blake’s nose to fully heal. But, he’ll certainly have eyes on him when he returns.

NEXT: Khamzat Chimaev Promises To Give Nate Diaz A “Funeral” For The Final Fight Of His UFC Career